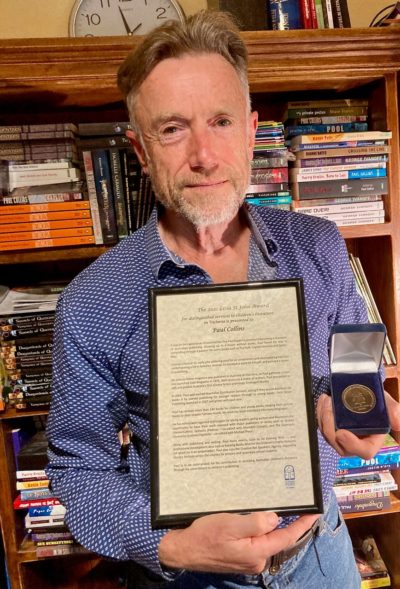 Collins is commended for his contribution ‘in enriching Australian children’s literature through his commitment to children’s publishing’.

After leaving school at 15, Collins’ early jobs soldering steel for air conditioners and electroplating had him ‘contemplating a life in factories. Instead, he decided to work for himself, and pursued a career in publishing.’

In 2007 Collins, who also runs the Creative Net Speakers’ Agency, launched children’s press Ford Street Publishing. He has written more than 140 books for children and young adults, ranging from picture books to ‘door-stopper fantasy novels’, with his work translated into many languages, and has edited series including ‘Shivers’ (HarperCollins), ‘Spinouts’ (Pearson, co-edited with Meredith Costain) and ‘The Quentaris Chronicles’ (Lothian, co-edited with Michael Pryor).

First presented in 1999, the Leila St John Award is given for services to children’s literature in Victoria and is named after the founding member of the Victorian branch of the CBCA. The 2020 recipient, announced in 2021, was Christine Oughtred. No award was presented for the previous year.

For more information about the award, see the CBCA website.