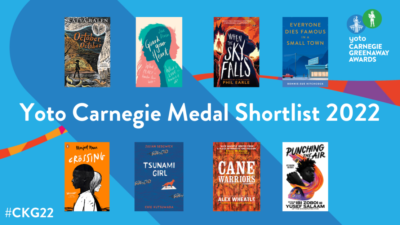 In the UK, the shortlists for this year’s Carnegie and Kate Greenaway Medals, celebrating outstanding achievement in children’s writing and illustration respectively, have been announced.

The works shortlisted for the Carnegie Medal for an outstanding book for children and young people are:

The works shortlisted for the Kate Greenaway Medal for illustration are:

As previously reported by Books+Publishing, Swiss-born long-time Australian resident Armin Greder was longlisted for this year’s Kate Greenaway Medal for his picture book Diamonds (A&U). The winners of last year’s medals were American author Jason Reynolds for his middle-grade book Look Both Ways (Atheneum) and Canadian artist Sydney Smith for his picture book Small in the City (Walker).

The UK’s Chartered Institute of Library and Information Professionals (CILIP) will announce the winners on 16 June at an event at the British Library. For more information about this year’s shortlist, visit the awards website.