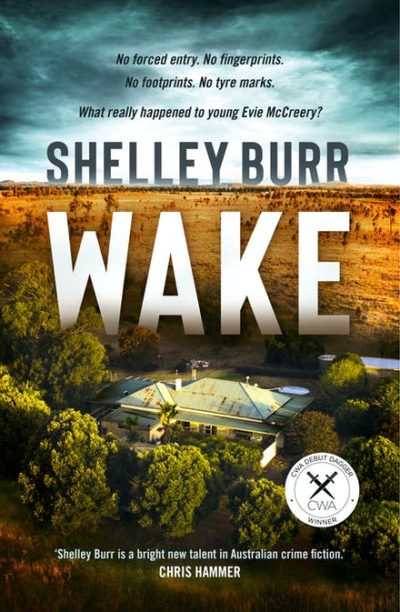 The question of what really happened to Evie McCreery has occupied amateur sleuths in online chat forums for years. But for Mina McCreery, ever since her twin sister was taken from their farm nineteen years ago while Mina slept unharmed, this question has defined her life. Lane Holland, a private investigator with an eye on the generous reward money and an undeclared vested interest in the case, decides it’s time to solve it once and for all. WAKE (the title is an acronym) is set in Nannine, a fictional outback town in New South Wales. Once a thriving town with stockyards and sheep stations, it is now drought-affected and exists in the dusty shadow of the high-profile crime. Online crime forum exchanges are used creatively in WAKE to open chapters and set the scene for the ensuing chapter. There is a complexity and depth to the characters that offer readers something more than merely a page-turning rush, although there is plenty of that to be found too. In her debut novel, Shelley Burr sensitively explores grief and the ongoing aftermath of trauma while delivering a cracker of a story and some surprising twists to the tale. WAKE is a welcome addition to the ever-growing ‘drought noir’ genre, and will appeal to fans of Jane Harper, Christian White and Chris Hammer.