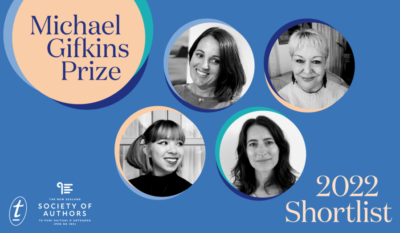 Text Publishing and the New Zealand Society of Authors Te Puni Kaituhi O Aotearoa (PEN NZ Inc) have announced the shortlist for the 2022 Michael Gifkins Prize for an unpublished novel.

The shortlist was selected by Text Publishing from a longlist of 13 curated by New Zealand writers Paula Morris and Vanda Symon, who said they were ‘impressed with the imagination, range and engagement with story of the submissions’.

In its fifth year, the prize honours Michael Gifkins’ contribution to writers and New Zealand literature.

‘A manuscript prize is all about providing writers with additional paths to publication,’ said Text publisher Michael Heyward. ‘It’s about creating demand for new work. It’s about identifying and applauding talent, and we have been able to do that again this year with the announcement of the shortlist for this year’s Michael Gifkins Prize. We believe that every year the quality of the entries for the prize continues to rise.’