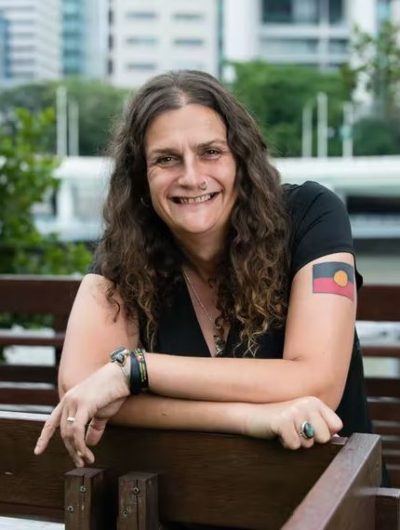 Described by reviewer Stefan Brazulaitis as Brave New World for the smartphone generation, Enclave (Hachette, July), Claire G Coleman’s third novel, centres on a young woman who lives in the walled city of Safetown—until she is exiled to the surrounding wastelands and begins to discover the truth. Daring to hope for a brighter future, Enclave shows why Coleman is such an important voice in Australian science fiction. Brazulaitis spoke to the author.

Enclave starts with a setting evocative of classic futuristic dystopias, but then takes the reader on a very different journey. What are your thoughts on dystopian fiction in general and what was your motivation to write the novel?

Dystopian fiction is a powerful tool to unpack and interrogate the world we currently live in.  It can be effective to extend current trends into an imaginary future and see where that takes us, what sort of world might arise if we don’t change our path to prevent it.

I can imagine some possible futures for the world, and for the country currently called Australia, if we don’t change our path, and those futures are worlds I don’t want to live in. I believe most people are basically good and hope people might rethink their prejudices and trajectories if they can imagine where we are, perhaps, going.

Without giving too much away about the story, this is a far more optimistic book—specifically through the actions of characters who have the agency to be kind or cruel, but who choose kindness—than your previous speculative fiction novels. How does this relate to your own thoughts of the future and human nature?

I want to encourage people to be kind, because kindness makes a real difference (and it’s really not hard to do) but I also want people to consider more deeply the consequences of their actions. It’s too easy to make the world worse.

The early part of Enclave is set in a community with values that many readers will find disturbing—though sadly familiar—which is later juxtaposed with the world outside it. Can you talk about your process of creating Safetown and the Australia beyond its walls?

Over the last few years I have become aware of increasing political polarisation and a rise in people trying to isolate themselves from opinions and lives different to their own. I wondered what sort of world would come about if the current cultural tendency towards isolation continued.

The rest of the world outside of Safetown was created as a contrast and to place it in context. Safetown is a character, and the world was created to give it somewhere to live.

Science fiction has a long history of cultural critique—authors like Ursula Le Guin and Octavia Butler spring to mind. You’ve written both fiction and nonfiction that speaks to social and cultural issues. Do you find there’s a different process or voice when writing between these genres?

I think I use basically the same voice when moving between fiction and nonfiction but the processes are quite different between the genres. Both genres begin with research and understanding and with a message that I want to deliver. After that they become quite different.

In my fiction I create or build a world to tell the story, to deliver the message. World, characters and story become a framework and the tools to interrogate the world and to say what I want to say. In nonfiction, on the other hand, the facts and analysis are delivered directly, embellished by the linguistic techniques of fiction but speaking directly about reality.

Both my fiction and nonfiction, importantly, are based in truth.

Are there any projects, fiction or nonfiction, that you are currently working on that you would like to talk about?

When I write a novel I am driven, it feels like the story makes me write it.  I currently have no novel clamouring for my attention. On the other hand I am starting collaborative work in theatre and film. On top of my dramatic work I dream of completing and compiling a collection of shorter fiction, drawing together my last five years of short stories, and creating new works that will enhance the collection.