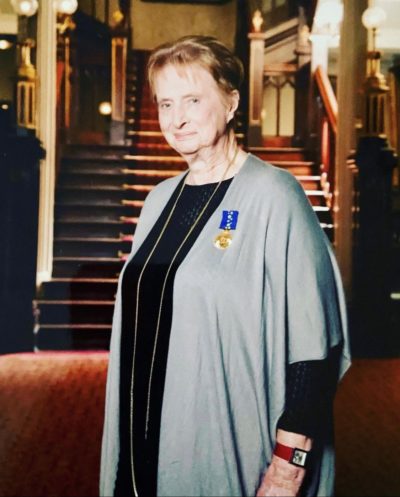 ‘If you are looking for a fascinating, compulsive industry where one day is never the same as the last with a fascinating product, try the book industry,’ Jean Ferguson once told the authors of a guide to Australian publishing. ‘You will probably never be rich, but you will never be bored.’

Born in 1931, Jean’s career in books spanned half a century and her work as a school librarian, bookshop owner, advocate of children’s literature, industry leader, mentor and joyous book lover had a profound effect on the reading culture of Wollongong and the nation.

Jean founded the school library at Pleasant Heights Public School as a teacher librarian before purchasing Coddington’s Bookshop in Wollongong in 1972. Jean employed at least 23 people and ran the busy store into the 1980s. Among Coddington’s customers was a young Nikki Gemmell, who fell in love with the books on the store’s shelves; the internationally bestselling author has described the store as a ‘Gong institution’.

Jean was a life member of the Australian Booksellers Association and served as president from 1986–88. Managing director of Readings, Mark Rubbo, who succeeded her as ABA president, said, ‘Jean’s inspiration and leadership during that time was pivotal.’

Rubbo said Jean drove booksellers and publishers to embrace new technology, submitted submissions to the Shepherd Inquiry into the Copyright Act, and pioneered training programs for booksellers as part of her conviction that bookselling is ‘an honourable and important profession’.

‘Jean’s passion, intelligence and experience meant that her views carried much weight and were widely respected within the industry,’ Rubbo said.

While running Coddington’s, Jean expanded the children’s section despite what was an adult-dominated market and advised schools and libraries on which kids books to stock. Later she taught children’s literature at the University of Wollongong and was closely involved with the Children’s Book Council of Australia.

Jean was actively involved in the Wollongong Library, where she founded the Literary Lunches event series, volunteered for Lifeline and advocated for the Indigenous Literacy Foundation and the Australian Reading Challenge.

For decades Jean shared her love of books through reviews she wrote for the Illawarra Mercury, Books+Publishing, Good Reading and ABC Radio.

Many authors were invited to her home in Kembla Grange, where she lived on a bush-fringed farm with her husband of 62 years, Bill. Guests to the farm included Bryce Courtney and Colleen McCullough. But no matter who you were, Jean welcomed visitors like family and sent them home with an armful of books.

Jean’s superpower, and the gift she leaves this world, was getting countless kids into reading. She could persuade the most reluctant reader to the page with her book-to-child matchmaking expertise.

Jean won the Lady Cutler award for services to children’s literature in 1994, won the ABA’s Lloyd O’Neill award in 2004, and was honoured with a Medal of the Order of Australia (OAM) in 2009 for services to the book industry and the community of Wollongong.

In an interview with the Mercury after receiving her OAM, Jean said she worried the clay under her house was buckling due to the weight of all her books, and shared part of the reason she was so passionate about children’s literature.

‘With the changes in technology, it is more important than ever for children to know how to read and write. They need to learn the difference between information and knowledge.’