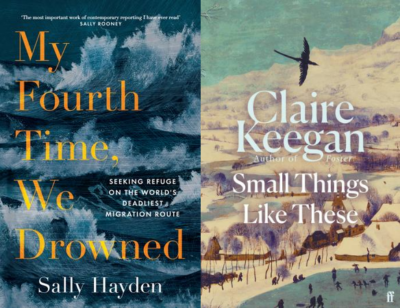 In the UK, journalist Sally Hayden and novelist Claire Keegan have won the 2022 Orwell Prizes.

Hayden was awarded the Orwell Prize for Political Writing for My Fourth Time, We Drowned (Fourth Estate), described by the prize judges as ‘truly a book for our times’ and an ‘extraordinary exploration’ of the migrant crisis across North Africa.

Irish author Keegan won the Orwell Prize for Political Fiction for her novel Small Things Like These (Faber), described by the judges as an ‘unforgettable story of hope, quiet heroism and tenderness’. Set in a small Irish town in 1985, the book centres on coal and timber merchant Bill Furlong, who encounters the complicit silences of a people controlled by the Catholic Church as he does his rounds during the lead-up to Christmas.

Hayden and Keegan, who each receive £3000 (A$5200), were chosen from shortlists announced in May.

The Orwell Prizes are awarded to one nonfiction and one fiction work that each come closest to George Orwell’s ambition ‘to make political writing into an art’, and are presented alongside separate prizes for journalism and for ‘exposing Britain’s social evils’. The winners of last year’s book prizes were Ali Smith and Joshua Yaffa.

For more information about the prize, see the Orwell Foundation website.