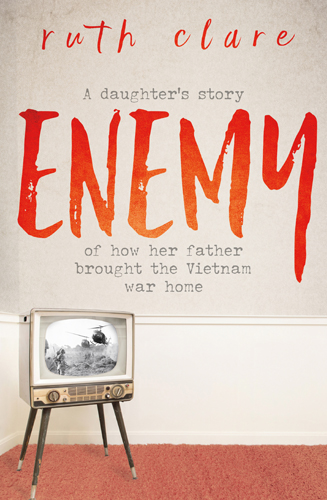 Domestic abuse and PTSD in returning soldiers are two issues the Australian media is only starting to raise awareness about, especially after high-profile campaigners Rosie Batty (A Mother’s Story) and Major General John Cantwell (Exit Wounds) began talking publically about their respective battles. Ruth Clare tackles both topics in her debut memoir Enemy. The enemy at the centre of Clare’s book is her father, a Vietnam veteran whose undiagnosed PTSD resulted in a war-like home environment for his wife and children. This is a simply told, accessible account of a young girl growing up in the clutches of a violent father. Clare isn’t out to settle any scores and she demonstrates a mature understanding of the psychology of abuse. She includes interviews with other Australian Vietnam veterans who were let down by an indifferent army on their return from an unpopular war, and is able to understand—without excusing—her father’s behaviour. In one powerful scene, she describes her teenage self running to the middle of a suburban park in order to scream out her frustration. It’s a sadness that the general public can no longer close its ears to, which is why confronting stories such as Clare’s must be read.

Emily Laidlaw is a Melbourne-based writer and editor