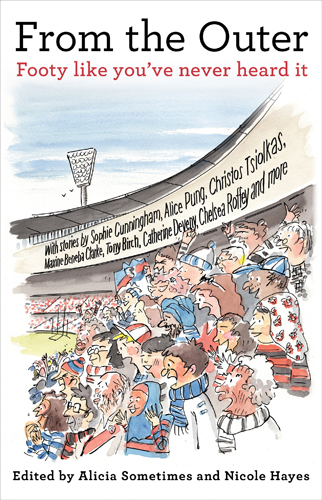 For a pastime beloved by so many Australians, the loudest voices in the world of AFL are invariably straight, white and male. From the Outer provides a valuable contribution to the discussion of football culture, with women, immigrants, LGBTIQ and Indigenous Australians discussing their love for, problems with, and place within the Australian game. Writers (and Hawthorn tragics) Alicia Sometimes and Nicole Hayes have assembled a diverse cast of writers, broadcasters and activists, as well as people directly involved in the game, including coach Peta Searle and player Kirby Bentley, whose pieces are less polished but whose voices are hugely important. The collection approaches AFL less as a sport than a cultural phenomenon—a common language that can build friendships, rivalries and identities. Some fans will be disappointed to see their clubs overlooked, and the book, perhaps unsurprisingly, is quite Melbourne-focused—a look at football culture in places like the Northern Territory or Tasmania would surely broaden its appeal. Even so, the book’s unique foregrounding of marginalised voices will attract readers of literature, cultural studies and sport alike. After another grim off-season, From the Outer is a timely reminder of what keeps us coming back to the oval.