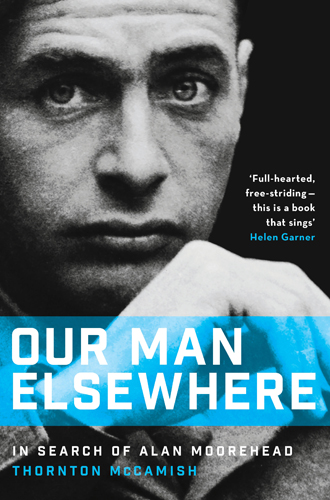 Journalist, war correspondent, minor novelist and major popular historian Alan Moorehead was one of the best-known expatriate Australians in the Western world. How is it that he is now almost entirely forgotten? Biographer Thornton McCamish became intrigued by Moorehead’s self-made success, notoriety and decline, and doggedly set out to discover as much as possible about his subject, going through 43 boxes of the National Library’s archival material in the process. McCamish takes us through his subject’s early life, his undistinguished school years, his escape from the provincialism of 1930s Melbourne, his struggling years as a journalist in London and as a junior war correspondent based in Europe, and his emergence as one of the most famous reporters of World War II. Being a consummate networker (as we would now say) he was usually in the right place at the right time, breaking stories that ricocheted around the world, feeding an apprehensive public and enhancing his reputation. He was, however, a prickly character who could be his own worst enemy, and McCamish does not gloss over his failings in giving us a detailed, involving and very readable look at the life of a flawed man with a large appetite for life.