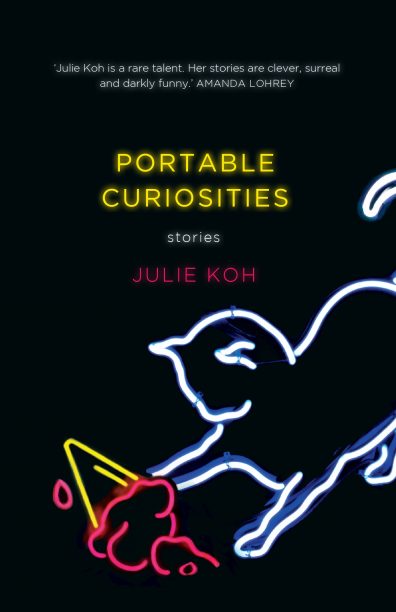 Armed with an uncanny ability to capture the zeitgeist of the time—whether it be contemporary society’s obsession with foodie culture or institutionalised racism and misogyny—Australian writer Julie Koh’s darkly satirical and convulsively funny short-story collection Portable Curiosities is as unsettling as it is edifying. Combining short stories published in The Sleepers Almanac, The Lifted Brow and more with previously unpublished work, Koh takes a magnifying glass to Australia’s greatest fallacies. ‘Civility Place’ charts the mind-numbing drudgery and subsequent mental degradation that comes with being a cog in a machine, while ‘The Three-Dimensional Yellow Man’ depicts the reductive ways people of colour are often perceived. In the latter, the truth is stranger than fiction, with Koh’s reimagining of Pauline Hanson’s rising influence far more bizarre than a one-dimensional yellow man transcending a cinema screen. Such is the beauty of Koh’s intricately woven stories, with startling insights into the human condition piercing every narrative, and familiar cultural emblems such as Oxford Street and Good Weekend imbuing the stories with a disquieting veracity. Joining UQP short-fiction writers such as Jennifer Mills, Chris Somerville and Paddy O’Reilly, Koh plays with the confines of the medium while exploring the human psyche in ingenious and percipient ways.