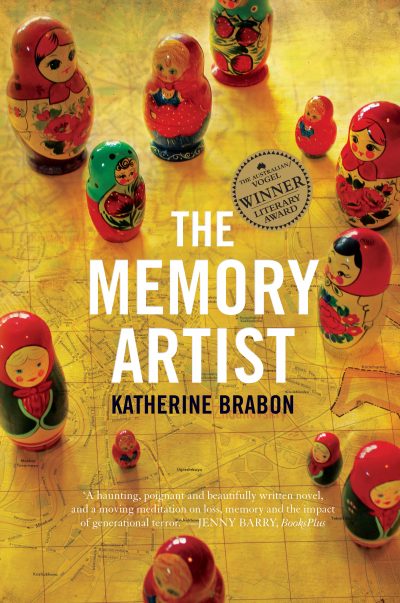 Katherine Brabon has won this year’s Australian/Vogel’s Literary Award for her novel The Memory Artist.

The winner was chosen by Australian literary editor Stephen Romei, author Rohan Wilson and BooksPlus bookseller Jenny Barry from a shortlist of four, which included Rocky Road by Anna Daniels, A Minor Fifth by Gareth Dickson and Coffin’s Reach by Christopher Przewloka. Extracts from each of the shortlisted titles have been published in the Australian here.

The Memory Artist is described as an ‘intelligent, moving, Russia-themed meditation’. Its protagonist is Pasha, born in Moscow during Leoni Brezhnev’s rule over the Soviet Union and an ‘eager 24-year-old’ when Gorbachev promises glasnost. ‘Through recollections and observation, Pasha walks through the landscapes of history, from concrete tower suburbs, to a summerhouse during Russia’s white night summers, to haunting former prison camps in the Arctic north. Pasha’s search to find meaning leads him to assemble a fractured story of Russia’s traumatic past.’

Wilson said of the winning book: ‘The characters are deep and rich, and the setting is never less than convincing … it keeps you reading just through the sheer quality of it all.’

Brabon, who lives in Melbourne, is undertaking a PhD at Monash University. The Memory Artist was published by Allen & Unwin on 27 April.

Last year’s winner was Murray Middleton for his short-story collection When There’s Nowhere Else to Run.