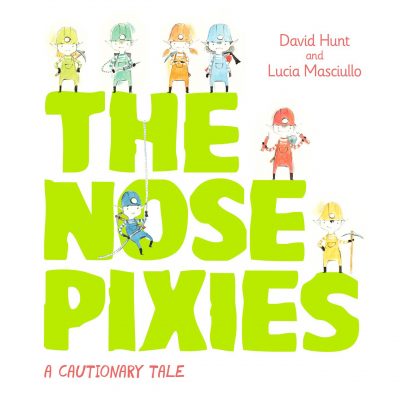 Everyone has heard of the tooth fairy, but what of the lesser-known nose pixies? The tiny, wingless pixies live in the royal kingdom of Schnozz, but instead of teeth they collect nose gold, which they use to build and fuel their cities. David Hunt—who had a hit with his satirical history book for adults, Girt—is clearly having too much fun as he comes up with ideas such as phlegm fountains and hanky-copters. One day, under the rule of King Mucus and Queen Achoo, the snot rocket squad (with names like Snuffly and Drippy) embark on their usual harvesting duties, but when they come across a young boy named Oliver, they discover the precious green boogers are all gone. That’s because Oliver has been constantly sticking his fingers in his nose and eating the findings. So Oliver’s father cleverly comes up with this excellent cautionary tale to stop his son’s habit. Kids will love all the disgusting things in this truly imaginative book, with the last few pages set to elicit screams of horror from children and adults alike. Lucia Masciullo adds to her growing reputation as an illustrator to watch, though her airy watercolour pictures are almost too light and ethereal for this rather earthy book.