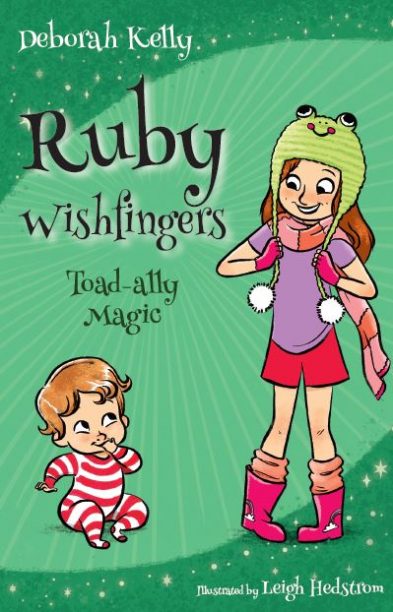 Ruby Wishfingers first discovered that she had wish magic in her fingers when she was nine. Now that she’s 11, she has 11 new wishes to spend! But when her awful younger cousin comes to stay, and he ruins the cake and banner Ruby made for her baby brother’s first birthday, Ruby gets mad. So mad that she breaks the Golden Rule of Magic and uses one of her wishes to turn him into a toad. Ruby will need all her other wishes to fix this mess, but now that she’s broken the Golden Rule, she doesn’t even have one. Toad-ally Magic is the second book in the ‘Ruby Wishfingers’ series of beginner chapter books. The story follows a familiar pattern of thoughtless wishes leading to escalating comical disasters that require the remaining wishes to fix. It’s a well-worn plot, which readers may recognise from other stories and fairytales, but the predictability could help younger or less confident readers tackle the book with confidence on their own. Leigh Hedstrom’s small illustrations (scattered at a rate of one every chapter or so) are lively and not too junior-looking, helping to break up the text without making it feel less like a real chapter book.