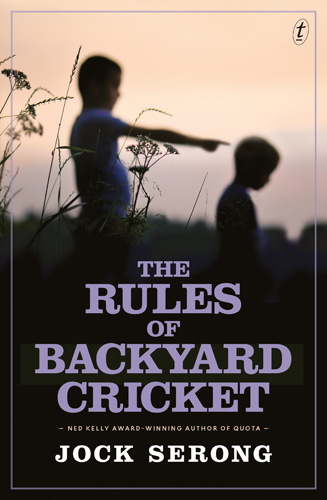 When infamous ex-cricketer Darren Keefe wakes up bound and gagged in the boot of a car, he begins reflecting on the life that led him there. Drugs, sex, booze, gangland chicanery, tragic deaths and cynically manipulated public redemption all factor, and are offset by recollections of the women in his life, and the heavy tolls his behaviour exacts from them. But it’s his lifelong rivalry/bond with his brother Wally—a clean-nosed former captain of the Australian Test side—that really fuels his thoughts and provides the book’s thematic through-line. While Jock Serong’s Quota (2014) nearly earned its comparisons to Peter Temple, his new book represents a sideways step for a talented novelist on the rise. To a non-initiate, the cricketing passages can err toward the technical at the expense of the evocative, and I couldn’t help but feel that Serong, a former lawyer, has hamstrung himself by doubling down on a story so dependent on this ‘journalistic’ content. Darren’s regretful ‘bad boy’ history seems ripped from the headlines—an overpaid, if somewhat sympathetic, screw-up given a crime yarn instead of a ghost-written memoir. Sports fans will no doubt be more receptive. Serong’s writing displays wit, insight and occasionally, splendour, particularly during its atmospheric, heart-in-mouth final chapter, which holds a literary power mostly lacking from the remainder of
the book.