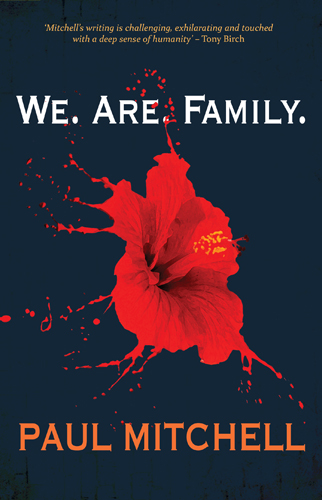 We. Are. Family (Paul Mitchell, MidnightSun)

Paul Mitchell’s debut novel is the rare book that seems to both invite every clichéd description of new Australian writing—visceral, lyrical, ‘ Wintonesque’—and somehow read as genuinely innovative. This is all the more impressive given Mitchell’s subject: a sprawling, dysfunctional family riven by the legacy of violence handed down from each generation, told almost entirely from the perspective of the clan’s male members, who range from problematic to abjectly despicable. It’s difficult to say who the main characters of We. Are. Family. are, as the novel’s nonlinear structure flits between generations and branches of the family tree. Mitchell’s deliberately unfocused narrative effectively conveys the cyclical nature of domestic violence. The tendency of his generically named characters to blur together is a choice that, while occasionally disorientating, demonstrates the pervasiveness of masculine paradigms, as well as their potential to be incrementally subverted. Mitchell’s control of the vignette-driven narrative is admirable, and with the exception of the final chapter—which, given the novel’s use of football culture as a running motif, is ironically something of a Hail Mary pass—he succeeds in creating a domestic fiction that is at once panoramic and suffocating. It is in equal parts reminiscent of Christos Tsiolkas’ The Slap and Tim Winton’s The Turning.