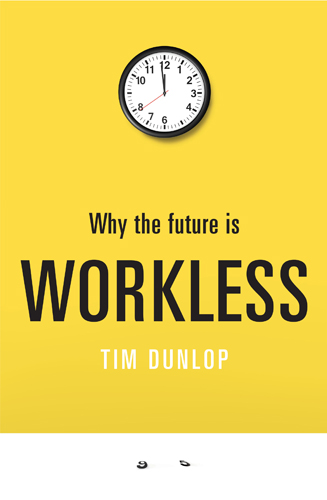 Why the Future is Workless (Tim Dunlop, NewSouth)

According to some of the best research, close to 50% of all jobs will be automated in the next 20 years. Whether these jobs will be replaced, as has happened in previous economic upheavals, remains to be seen. A worst-case scenario, with mass unemployment, could paradoxically provide positive outcomes for society, according to writer and academic Tim Dunlop. He argues that government will be prompted to pay a universal basic income. Providing such a universal entitlement would have other social benefits besides poverty relief: women and poor workers would have more autonomy over their lives. Dunlop provides impressive research to argue that a universal basic income is economically viable. He also marshals field research showing that people given such a wage do not waste the money, but invest it in better health outcomes and small business initiatives. Why the Future is Workless makes an appealing argument for a brighter political and economic future made possible by the march of technological change; however, Dunlop doesn’t address such potential problems as the corporate concentration of internet power and government digital surveillance. Carefully argued, astute and featuring some superb analysis, this is a persuasive piece of political philosophy that deserves attention.