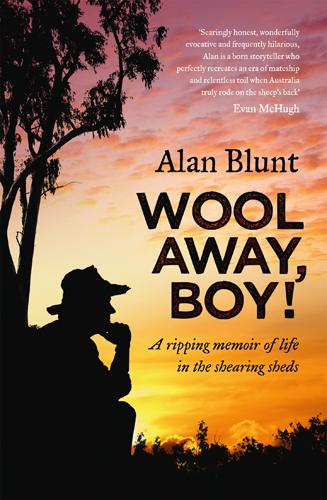 Wool Away, Boy! A Ripping Memoir of Life in the Shearing Sheds (Alan Blunt, William Heinemann)

‘The traditional shearer’s campfire yarning, joking, chiacking and debating over politics, general news, women, sport and family were morphing from culture to folklore,’ writes Alan Blunt. It’s a change that Blunt seeks to undo in Wool Away, Boy!, his humorous and slight memoir of the shearing sheds of the 1950s and 1960s. This was the time when Australia rode on the sheep’s back, before dope, rock ’n’ roll, political correctness and what Blunt calls ‘sexual adventurism’. The son of a shearer who found his feet in the sheds, Blunt spent his teenage years working and living amidst the ‘babblers’ (cooks), ‘dreadnoughts’ (shearers capable of getting through 300 sheep a day), ‘pitch and tosses’ (bosses) and rouseabouts (you know what that means) who thought nothing of having a biff and a drink after a full day’s shearing. Drawing on the reservoir of stories those years gave him, applying a liberal amount of rose-tinged varnish to each anecdote, Blunt shakily evokes a world of mates and gals, sheep and dogs, pubs and country roads. Though decidedly scattershot in approach, with a repetitious cast of characters and a lack of emotional resonance, Wool Away, Boy! is enlivened by a vernacular that’s largely true to the ear. It’s a light, breezy read.

Patrick Mullins is a Canberra-based academic and writer