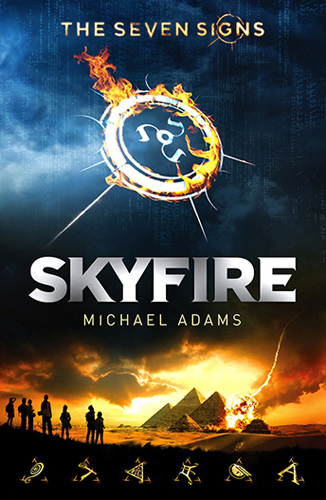 In the near future, seven teens from around the world have been selected as the winners of the DARE Awards by internet trillionaire Felix Scott. Their skills and achievements have already shown them to be potential world leaders, and Felix wants to support them with a mentoring scheme and a million-dollar cash prize. Andy, Dylan, Isabel, J J, Mila, Yasmin and Zander are pulled into a global whirlwind of touring and publicity that morphs into something darker and more dangerous when they are each sent a mysterious symbol and a link to an online countdown. As the DARE winners struggle to decode the clues, the countdown ticks on, but to what? And who is behind this world-spanning conspiracy? Michael Adams launches readers into the world of the ‘Seven Signs’ with Skyfire, a fast-paced and gripping globe-trotting action-mystery. The cast is admirably multi-ethnic and gender-balanced, and their award-winning skills range from citizen journalism to game design, astronomy, robotics and activism. However, the characters are only very quickly sketched and the central mystery is somewhat opaque. The sequels to Skyfire will be published every two months, which is just as well given the cliffhanger ending. This is recommended for older primary and early high-school readers.