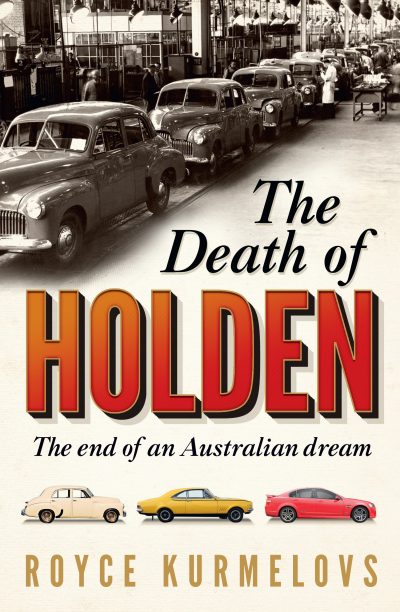 The Death of Holden: The End of an Australian Dream (Royce Kurmelovs, Hachette)

According to the dominant narrative, the demise of Australia’s car industry is easy to explain: we just couldn’t compete with competitors in Asia. The imminent closure of the car factories is a good thing, in this telling. It’ll allow for competition and innovation. Royce Kurmelovs’ The Death of Holden seeks to turn this narrative on its head. ‘It takes about 30,000 components to make a car,’ writes Kurmelovs, ‘right down to the smallest screw.’ Kurmelovs draws on the people who’ve made those 30,000 components to sketch the impending consequences of the car industry’s demise and the greater cost that will be exacted—on the network of businesses linked to the industry, on the towns that surround the factories, and on the broader manufacturing sector, which is set to lose a generation’s worth of knowledge and experience right before it builds 12 submarines. Kurmelovs is at his best when he records the plaintive, angry, nostalgic and stoic workers he meets and interviews. He falters when he goes after the politicians and car companies: without access, his observations are often glib, recycled and already dated. The Death of Holden doesn’t want to be a balanced book. It simply wants to tell, with sympathy and compassion, a story that hasn’t been told—before it’s too late.

Patrick Mullins is a Canberra-based academic and writer