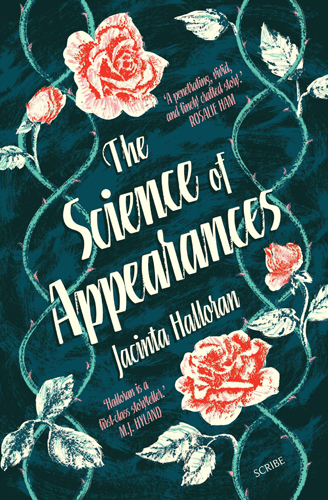 A trained GP, Jacinta Halloran continues to draw on her medical knowledge in her third novel, The Science of Appearances, exploring genetics—and its controversial twin eugenics. The novel opens with an arresting image of two siblings nestled in their mother’s womb, before jumping forward to Mary and Dominic as children and the sudden, dramatic death of their father. This sets in motion an unfortunate chain of events which drives a wedge between the close siblings. We then follow Mary and Dominic’s separate journeys, from their bucolic home in the Macedon Ranges to cosmopolitan post-WWII Melbourne. Along the way, questions of biology and family are explored by Dominic, who studies science at university, while Mary becomes an artist. These serious themes sit alongside the novel’s cosier, romantic subplots. Halloran’s prose is mannered but elegant—it nicely mirrors the social constraints of the time she’s writing about. There is a large cast of side characters, some well sketched but others are faint outlines, which lets down the overall plot. The novel’s strength lies in its evocation of mid-20th century Melbourne and its bohemian arts scene. Halloran’s vibrant descriptions of St Kilda and Carlton offer a pleasant postcard to Melbourne’s past.

Emily Laidlaw is a Melbourne-based writer and editor