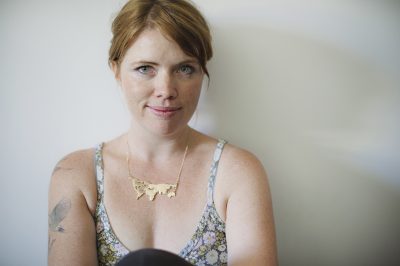 Looking for a fair fight: Clementine Ford on ‘Fight Like a Girl’

Clementine Ford’s debut Fight Like a Girl (A&U, October) is an examination of ‘what it means to be a girl in the world today’, fuelled by Ford’s ‘clear-eyed defiance and refusal to compromise’, writes reviewer Veronica Sullivan. She spoke to the author.

You’re a prolific writer and columnist on feminist issues, but this is your first full-length book. How did the process of writing Fight Like a Girl differ from the way you approach shorter pieces?

I found the process both liberating and terrifying in equal measure. After four years spent pruning arguments into bite-sized pieces of around 800 to 900 words, it was a relief to be able to finally flesh them out a little more. At the same time, that sudden freedom was at odds with the learned impulse to be succinct. In the initial stages of writing I felt quite anxious about the book’s monumental size, at least, in comparison to what I was used to writing. My friend Michelle Dickinoski suggested I set myself a target of writing 500 words a day, and so I worked at settling into that rhythm. This structured approach didn’t carry through the whole book, but it gave me a little bit of mental breathing space. More importantly, it taught me to have faith in the fact I could write something that was much more long form than anything I’d attempted before.

Fight Like a Girl blends memoir with reportage and polemic. How did you balance these different forms, and how conscious were you of finding the right mix for the book?

I’m probably not meant to say this, but I’m still not entirely confident I’ve got that balance right! I suffer from a terribly British compulsion to be stoic instead of vulnerable, and it’s quite difficult for me to share those secret parts of myself with an audience without feeling silly or performative. At the same time, I have these fundamental life experiences that have been shaped by almost all of the topics I discuss in the book, and it would be inauthentic for me to not ‘go there’ with them. I didn’t want to anchor myself too heavily in confessional writing, because it’s not a style I’m exceptionally comfortable with and I thought that would be apparent in the book’s tone. In the end, I went with what came naturally to me—an exploration of infuriating, rage-inducing behaviours that harm all girls peppered with examples of my own experiences of them.

You share your own stories of dealing with eating disorders, mental illness and awkward sexual encounters. Did you find it confronting or challenging to be open about such intimate experiences?

I found it very uncomfortable in parts. It’s a little like inviting a roomful of strangers to witness a slideshow of you posed awkwardly in terribly unflattering underwear. Not only are you embarrassed to show them yourself in this light, you also have the secondary embarrassment that comes from being caught out assuming they’ll even be interested in seeing you in your underwear, terribly unflattering or not.

I’m also conscious of how laying these facts on paper will fuel the abuse I receive on a regular basis—here, at last, is the evidence of my mental illness, my feelings of poor self-worth, my bruised heart and all its rejections. These are the reasons she’s an ugly, man-hating feminist, and it’s just as we’ve always known!

Ultimately, I just have to put those concerns out of my mind and hope that other women see themselves reflected in the raw, tender person I’ve laid bare on the page. I want readers to know that they’re not alone, and if I have to strip myself naked for them to gain that knowledge, so be it.

There are a lot of misconceptions about feminism and feminists. What ideas do you hope readers will take away from Fight Like a Girl that they may not have encountered before?

I’m not sure it’s accurate to say these ideas haven’t been encountered before, but they’ve certainly been buried for years. I would like women to realise we do not owe politeness and deferential thanks to anyone in exchange for liberation and equality. So many of the modern, mainstream expectations of feminism are rooted in the same old patriarchal ideals of gender. Feminists must be nice and placid. We mustn’t be too bolshy with our words, lest they make men feel bad. We must ask nicely if we want anything to change. What this has created is a situation in which the illusion of feminism exists (and is exploited, most notably for capitalist gains) while nothing really changes.

Girls and women are given a saleable model of ‘Girl Power’ to aspire to, but too many of them are still deeply terrified of angering the men who continue to hold power over them. I want readers of Fight Like a Girl to walk away not only dismissing the ‘misconceptions’ about feminism and feminists, but also to recognise that they are irrelevant. We don’t need to appease anyone or reassure them that feminists are still pretty, that we still like men, that we don’t want radical change. We need to get angry about how and why we’ve been forced to operate as feminists under these terms, and we need to stop giving a fuck if anyone likes us or not.

Which books played a part in introducing you to feminism, and which contemporary feminist writers do you think everyone should be reading?

It’s not a feminist text, but David Crabb’s Bad Kid (HarperCollins) is an exceptionally funny, moving memoir about his experience growing up gay in small-town Texas and moving in circles of other outsiders. It caused me to laugh and cry uproariously in equal measure.

From a feminist perspective, I think Charlotte Wood’s The Natural Way of Things (A&U) is a flawless book about misogyny, rage and the ways in which women choose to survive.

Finally, Kirsty Eager’s Summer Skin (A&U) is a brilliant read for young adults and oldies alike. It explores a lot of feminist themes like slut shaming and sex positivity. And it’s hot as hell!