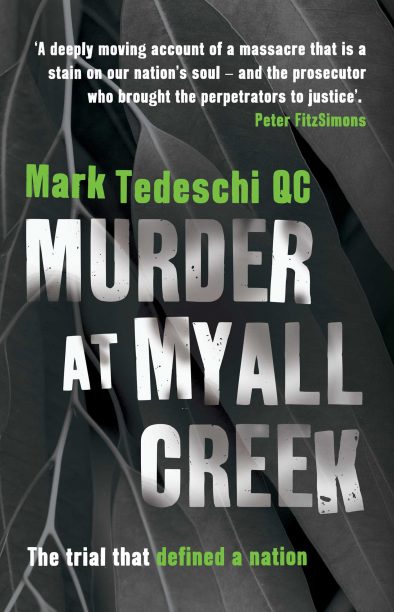 Murder at Myall Creek: The Trial That Defined a Nation (Mark Tedeschi, S&S)

Massacres of Indigenous Australians were not unusual during the early colonial history of Australia. What sets the 1838 mass murder at Myall Creek in central New South Wales apart was the fact that the case was brought to court. Eleven stockmen were tried for the murder of between 20 to 30 members of the Wirrayaraay tribe, many of them women and children. The Wirrayaraay people had been living peacefully at the Myall Creek station when they were hunted down and murdered. The killers’ cattle had been speared by some unknown Indigenous people, but not the Wirrayaraay. Mark Tedeschi has written a compelling piece of Australian history, one that also doubles as a sympathetic biography of attorney-general John Hubert Plunkett. Irish Catholic and politically progressive, Plunkett doggedly prosecuted the 11 men responsible. The case sent shockwaves through Australian society: it was unthinkable that white, European men should hang for killing ‘blacks’. Murder at Myall Creek paints a striking portrait of early colonial Australia, examining the development of Australian law, attitudes to Indigenous people and how violence was used to protect the wealth of the squatter class. Readers of Henry Reynolds’ work on frontier Australia will find much to reward in this considered and elegant work.