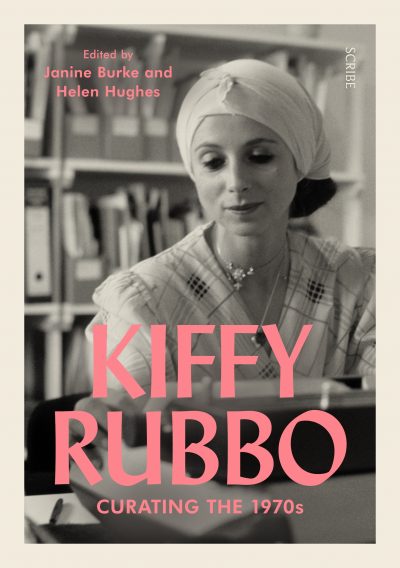 Sometimes studying the micro gives us the best view of the macro. Reading the essay collection Kiffy Rubbo is one of those experiences. Art curator Kiffy Rubbo provided space and direction for an artistic explosion in Melbourne in the 1970s, serving as the director of the Ewing and George Paton Gallery at the University of Melbourne from 1970 until 1979 (assisted by Meredith Rogers from 1974). The gallery was the first publicly funded art space in Australia dedicated to contemporary art. Not only did it lead the way for new art in Australia, it reflected what was happening in other cities such as New York, exhibiting artists that would never get their work shown in mainstream galleries and experimenting with new media such as video. It was the base from which the Melbourne art establishment was challenged and a centre for feminist expression that started enterprises such as the Women’s Art Movement and the Women’s Art Register. The interesting mix of contributors to this book make for a complete and complex picture of the time and the person. The essays are, on the whole, excellent, and the view of the art world in the 1970s and onwards is one of the important attributes of the book. Kiffy Rubbo will appeal to anyone interested in 20th-century Australian art. Its story is a really good example of how the arts can be political, progressive, important and challenging. I hope those who knew Rubbo will find it has done her visions and effort justice.

Clive Tilsley is the owner of Fullers Bookshop in Hobart