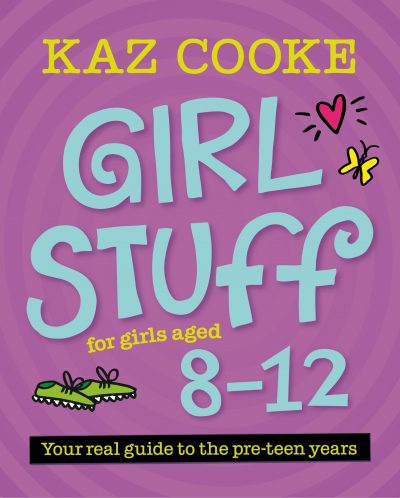 Girl Stuff 8-12 is a spin-off from Kaz Cooke’s 2007 book Girl Stuff, which was written for teenagers. It’s a different beast to the original: Cooke has written new material and rewritten sections to specifically address the concerns of a younger audience. Some sections in the original have also been omitted, presumably due to age sensitivity. With many girls starting puberty earlier these days, an age-appropriate book devoted to tweens is a canny move. Cooke’s characteristic humour tackles a range of subjects such as body changes, bullying, breaking friendships, blended families, and moods and emotions. There’s also a section on ‘phones, apps and being online’, a helpful resource in this tech-crazy world, even if Cooke points out that most girls in this age group don’t need their own phones and it’s illegal for them to use ‘social media’ anyway. Girl Stuff 8-12’s chatty, conversational tone will reassure both tweens and their parents, and Cooke’s cute little cartoon illustrations, sprinkled throughout, are visually appealing and break up the text. The book includes quotes from real girls and has information vetted from medical experts, so it’s a good general resource for those on the cusp or in the early throes of adolescence. The world will be an exciting and confusing place for tweens in the 21st century and Girl Stuff 8-12 will hold their hands through some of the more perplexing moments.