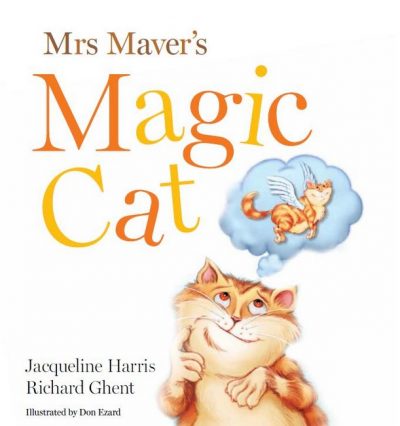 Cats are vain, self-centred creatures. Anyone who’s ever owned one knows that they all think they are magical, that doors open for them and food appears when they need it. Mrs Maver’s cat is no exception. As he struts about the house, waited on by Mrs Maver, he is utterly convinced that he is magical. He fluffs up his big, thick, magnificent ginger tail and expects magic to happen, particularly when he wants a bowl of food. And it does. However, his confidence is shattered one day when he meets a rat. At first the rat is frightened he might be eaten, but the cat is so well fed this doesn’t enter his head. He tells the rat that he’s magical, but the rat wants proof and challenges the cat to fly. What ensues is a blow to the cat’s ego, and he needs reassurance. It all ends well with the cat once more comfortable and the rat highly entertained. Don Ezard’s illustrations are colourful and full of movement, capturing the character of the cat and the humour of the situation. This picture book will amuse children aged six years and up, and is suitable for sharing with younger children.

Margaret Hamilton is a former children’s book publisher. She is now proprietor of Pinerolo, the Children’s Book Cottage in Blackheath, NSW (www.pinerolo.com.au)