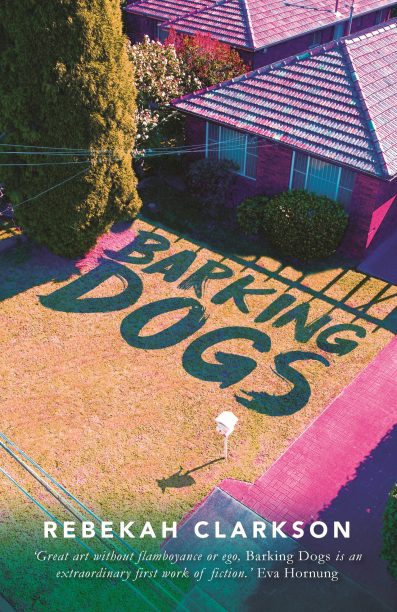 Barking Dogs is a novel in stories from short-story writer Rebekah Clarkson, set in the fictional Mt Barker, a once sleepy country town being engulfed by the outer suburbs. Each story is a glimpse into the private struggles and quiet hopes of its residents, old and new. Strung together, they form a distinctly Australian allegory of urban sprawl, McMansions and the plight of the aspirational classes mortgaged to the hilt. In ‘Something Special, Something Rare’ (previously published in 2015 by Black Inc. in an anthology of the same name), a father struggles to connect with his troubled teenage son. In ‘Jasper’, a man driven to the brink by mortgage repayments takes drastic action over the incessant barking of a neighbourhood dog. And in the final story ‘If It Wasn’t This’, set decades earlier when Mt Barker was still a country idyll, Mary (who we also meet as an elderly neighbour driven to despair by the same barking dog) is a young woman trying to start a family. Fans of short fiction with a strong Australian flavour will appreciate Clarkson’s satisfying use of both the novel and short-story forms, and her ability to sketch intimately relatable characters with humour and generosity, silhouetted against a devastating panorama of contemporary Australia.

Jenni Kauppi is an editor, critic and bookseller