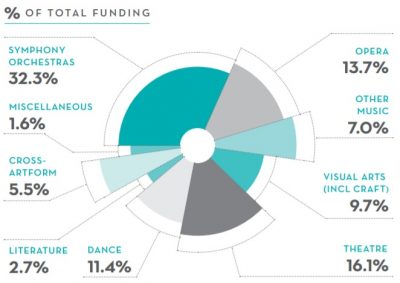 In total, the Australia Council allocated $173.8m in funding for artists and arts organisations in 2015-16, including $14.6m for individual artists and $159.2m for arts organisations. A large proportion of the funding went to the 28 ‘Major Performing Arts Organisations’ (MPAs), which are made up of 10 orchestras, eight theatre companies, five ballet companies, four opera companies and one circus. The MPAs’ combined funding accounted for $107.8m (62%) of Australia Council’s funding in 2015-16.

The report references several Australia Council-funded literature projects, including the Visiting International Publishers (VIPs) program at this year’s Sydney Writers’ Festival. ‘Following the event, seven titles were purchased with a further 50-60 titles being considered over the next five years,’ said the report. The VIPs program also included a panel ‘aimed at developing awareness of Indigenous literature and growing international sales and markets for Indigenous writers’, which was ‘attended by 16 international publishers and 40 Australian publishers’.

The report also highlighted the biennial First Nations Australian Writers Network Workshop in Melbourne in August 2015 and the black&write! editing internships program, which each received funding from the Australia Council.

Australia Council CEO Tony Grybowski said in the report: ‘The 2015-16 year has seen the Australia Council deliver the first full year of activity under its Strategic Plan, A Culturally Ambitious Nation. The strategy set out some bold aspirations and was supported by major reform, including an integrated new model for supporting Australian arts. Following the budget changes announced in May 2015, the Council revised the newly launched reforms to maximise the resources available.’

In May 2015, the federal government announced it would cut $110m from the Australia Council over four years, with $104.8m of the funding to be directed to a new National Program for Excellence in the Arts within the Arts Ministry (subsequently renamed Catalyst). Since then, $32m in funding has been returned to the Australia Council.

The Australia Council’s annual report was tabled in the Federal Parliament on 18 October. To view the full document, click here.