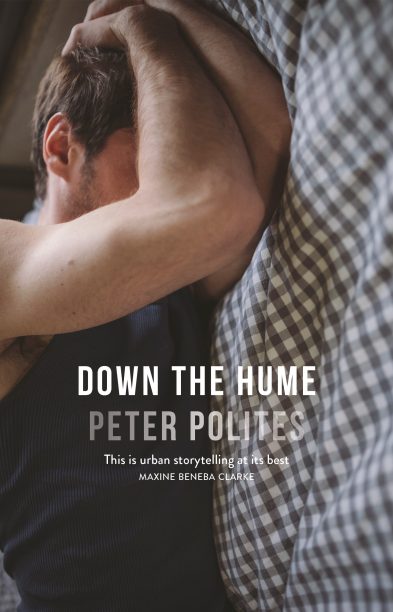 Down the Hume (Peter Polites, Hachette)

The narrator of Peter Polites’ smart and pleasantly unnerving debut novel, Down the Hume, is in a bad relationship with a physically abusive man who is only ever referred to as ‘Nice Arms Pete’, and who sometimes provides him drugs, sometimes doesn’t. We see little physical or emotional intimacy between them. Rather, we see a series of episodes in which the narrator attempts and fails to get Pete’s interest, stalks him around Sydney, battles with addiction and, in flashbacks, tries to and sometimes does hook up with various unsuitable men. The book is as much a story collection as a novel, and has qualities of both, with admirable plot compression and well-developed characters. The prose is clipped, streetwise and largely humourless—at times the narrator’s self-destructiveness and difficulties stemming from his underprivileged upbringing feel unrelenting. Polites is a Western Sydney writer whose work is informed by his Greek-migrant-family background. He will appeal to 20-something politically informed, literary readers. The narrator’s obsession with an uninteresting, beautiful man and functional screwiness recalls Garth Greenwell’s What Belongs to You, but he generally lacks that book’s curiosity for people, tending instead toward knowing dismissiveness. The strongest moments are with the young and the old: the narrator’s flashbacks to his schooldays are originally drawn, and his growing friendship with an elderly man in a care home has a rare tenderness.