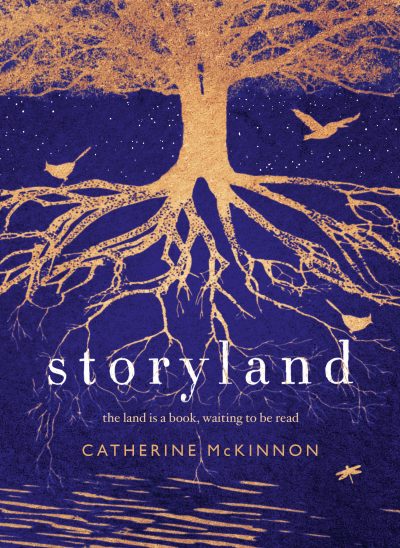 Storyland by author and playwright Catherine McKinnon is a beautifully woven story of Australia: the land, the animals and the people—those who have always been here, those that have arrived, and eventually, those who are left behind. While McKinnon’s language is jarring in the beginning—the first narrator, Will, is a young sailor travelling with Mr Bass and Lieutenant Flinders out of Sydney Cove in 1796—I soon realised that the character’s language was true to the era and education he would have received. This narrative approach is seen with every subsequent narrator: the repetition of words by Bel, an 11-year-old who struggles with numbers and stutters in 1998; the laboured and roundabout use of pronouns by Lola in 1900; the rough and dismissive words of Hawker, an ex-convict in 1822; and so on. With five narrators spanning five different time periods, each written with extraordinary detail, the novel becomes an accumulation of short stories that are linked through a single shared place. In her second book, McKinnon delivers a devastating retelling of man’s effect on the land and the native people, and offers a chilling insight into what may come to pass with climate change. Storyland is reminiscent of Patrick White’s A Fringe of Leaves, Kate Grenville’s The Secret River and The Lieutenant, Amanda Hickie’s An Ordinary Epidemic and even, dare I say, a bit of Tim Winton’s Cloudstreet.

Kate Frawley is the manager of the Sun Bookshop