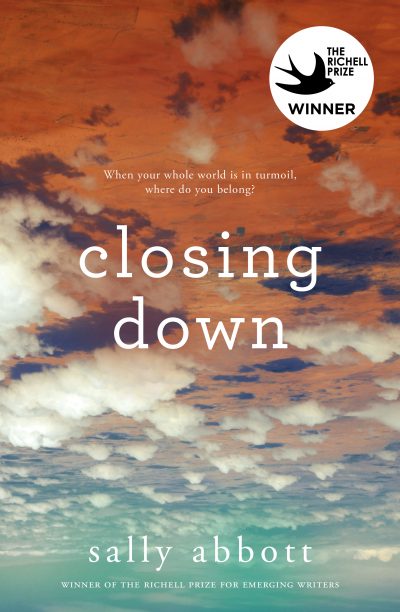 Sally Abbott’s manuscript was the inaugural winner of the Richell Prize, which was set up by Hachette Australia in honour of former CEO Matt Richell. Closing Down conjures a dystopian future for Australia and the world, with Australian towns systematically closed down as a reflection of a much more disturbing global refugee crisis. Robbie travels the globe as a journalist—who are now fined if found expressing dissent—and Clare struggles to survive on rations in Robbie’s hometown. As their lives circle ever closer, the chaos surrounding them threatens the one safe and authentic space that they both count on—Granna’s House of Many Promises. Robbie’s life is complicated and enriched by a love affair with refugee worker Ella—a woman so exposed to trauma on an unfathomable scale that when tragedy strikes at home she is simply unable to face it. Ella and Granna both work to support those affected by disaster, but on strikingly different scales. Strong imagery, such as bones falling from the sky, plastic gardens and refugee hunting grounds, demonstrate a disturbing divide between privileged and destitute. Though it meanders from scene to scene rather than pulling the reader strongly into a plot, Closing Down is a fitting—if terribly foreshadowing—story for today’s political climate.

This One is Ours (Kate O’Donnell, UQP)  Young adult