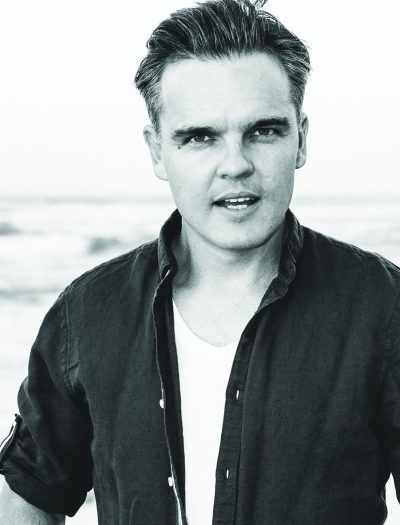 Was there a particular event in your life that inspired this story?

One of my favourite quotes is from Stephen King’s novella The Body: ‘I was twelve going on thirteen when I first saw a dead human being.’ I was thinking about this quote a few years ago, and I wondered when I first saw a dead human being—or if I had ever seen one. I remembered the week I did work experience with Channel Ten news when I was in high school. I followed a news cameraman around Sydney, and we covered a story where a man stole a bag and jumped over a fence at the back of a park, not realising the back of the park was actually on top of a multi-storey car park built into the side of a steep hill. He fell a number of storeys to, I think, his death. Harry Potter was the crime reporter that day and I started to wonder, what if a crime reporter had a son who came out on a story with him, picked up some evidence—a receipt, the arm of a pair of glasses—and started doing his own investigations? That was the beginning.

What sort of research was involved in writing this novel?

I read lots of articles about crime reporting. I read ‘Crime Reporter’ comic books to inform the creation of Sam’s own comics. I took photos of apartment buildings where the story could be set. For me, setting is so important. Most of the novel takes place in one apartment building so I needed to know that space intimately. I thought and read a lot about initiation, rites of passage, and kids and teens who develop resilience to deal with strong emotions.

Many of your books are concerned with male relationships, particularly between fathers and sons. Why are you drawn to this theme?

It seems to be what naturally flows from me. Almost every book I’ve written seems to be about father-son relationships. (Even the head lice in my ‘Nit Boy’ books a few years back explored their father-son bond.) It’s not a conscious choice. I have two boys and I try to be the best father I can be so I think about what that means quite often. I also like to explore imperfect parents. Traditionally it’s the step-parent who is compromised in children’s literature. Or the parents aren’t present at all. That’s the safer option. But I like to write about everyday parents in high-pressure situations forced to make decisions that may or may not be ‘right’. My hope is that kids and adults will understand and connect with these flawed characters doing the best they can with the resources and knowledge they have.

What is it about crime stories that fascinate you, specifically as seen through the perspective of a child or teenager?

Twelve or 13 is a powerful age when we really begin to explore and experiment with our own sense of morality, developing beliefs that may differ from our parents’ views. This makes it an exciting age to write for and about. Everything is changing and anything is possible. Crime provides a high-pressure, high-interest situation to explore the moral and ethical choices that a character and, by proxy, the reader might make under very difficult circumstances.

What are you working on next?

I’m always writing short stories for the ‘My Life’ series (illus by Gus Gordon, Random House). They’re fun to write between drafts of a longer novel. I’ve also been playing with a story about a lockdown in a school and how the small group of kids and their teacher deal with it. The story explores the nature of fear and empathy. And I’ve long wanted to write a thriller about a search for a missing kid on the shores of a lake that covers a sunken town. It involves cryptic clues and a coming-of-age as the town’s ancient secrets bubble to the surface of the lake.

I’m reading Robert Newton’s Runner (Puffin) at the moment. It’s the best middle-grade/YA novel I’ve read in some time. It resonates with the stories I aspire to tell—fast-moving, page-turning but with real characters wrestling with big ideas. It respects the young reader and is just as engaging for the adult reader.

The Fall is published by Random House in June