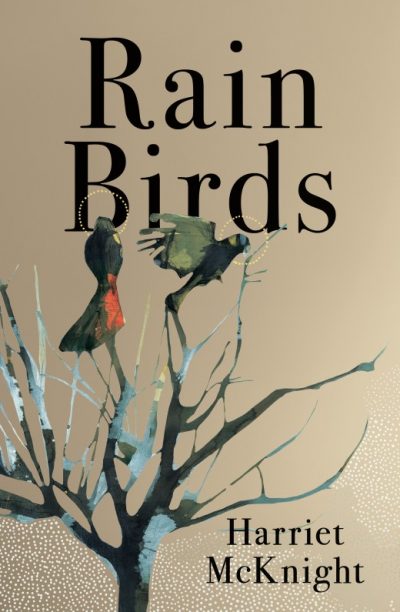 Set in regional Victoria, Rain Birds divides its time between two female protagonists. Pina has lived with her partner Alan in the area for years. Alan has early onset Alzheimer’s, and Pina is at the point where she can no longer deal with his mental decline and physical deterioration, but she keeps delaying the inevitability of putting him into care. Arianna is an environmental scientist who has had to accept funding from an oil company looking to greenwash its activities as it drills in the area’s pristine forests. Working on a captive release program for Glossy Black Cockatoos, she is obsessive about her project and contemptuous of others—which is not helped by a hinted-at trauma in her past. Pina and Arianna are unwillingly linked by Alan’s interest in the cockatoos, but as the summer stretches on with record-high temperatures, both start to reach their breaking points. Harriet McKnight’s debut novel—which has one of the year’s most beautiful jackets—has promise, but is let down by Arianna’s unformed and unsympathetic character. Pina and her struggles with Alan are far better drawn, and McKnight’s depiction of dementia is excellent. Book clubs will find plenty to discuss regarding themes and characterisation, and readers who want their literary fiction to engage with serious topics will find this fits the bill.

Lindy Jones is a senior buyer and bookseller at Abbey’s Bookshop, Sydney