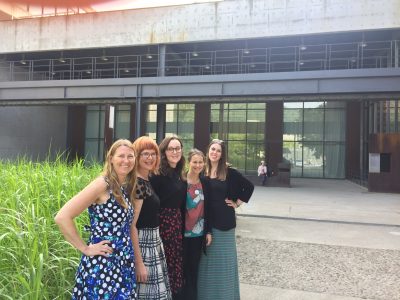 A delegation of Australian publishers travelled to Beijing and Seoul in June to ‘research market opportunities for authors and publishers in China and Korea’.

This was the fourth time a rights and publishing delegation has travelled to Seoul, and the first year that we’ve extended the program to Beijing. These delegations follow successful initiatives with the Taipei International Book Exhibition over 10 years.

There are many challenges in both the Korean and Chinese markets. Many of those challenges were known to us, but some (e.g. Chinese publishers reducing the number of translations they acquire) are new. But for each new challenge, it did seem that a previously missed opportunity also arose. Ultimately, the delegation was excited by the potential of both markets and confident of deals to come.

Our purpose was, of course, to pitch our lists and authors and secure rights deals. But just as importantly, our goal was to learn more about each market, build on existing relationships with Korean publishers and begin new relationships with Chinese publishers—while also expanding our contacts within a publishing group. Many of us had the opportunity to meet with Yuan Nan and Wu Yinging from Phoenix Publishing and Media Group during the 2017 Visiting International Publishers Program. Our delegation was delighted to meet with another editor from Phoenix while in Beijing.

In many ways, the Korean market feels more known to us. After three previous publishing delegations to Seoul, and Korean publishers and a co-agent travelling to Australia for the Visiting International Publishers Program since 2012, it feels as if we have more direct market knowledge to hand. Some trends still hold: business books dominate the bookshops, children’s picture books are still in demand and literary fiction still dominates the bestsellers list.

We also see new trends emerge. Previously, the message was very much that Korean consumers don’t have time to ‘read for pleasure’. Now, translations of authors such as Liane Moriarty, Jojo Moyes and Andy Weir feature on the ‘New Releases’ and ‘Bestsellers’ tables, next to translations of Haruki Murakami, Guillaume Musso and Fredrik Backman.

Conversations could easily have been dominated by competing definitions of what is ‘commercial’ fiction versus ‘mass market’ fiction versus ‘upmarket’ fiction. It seemed that we could all agree on a definition of ‘literary’, but anything outside of that came down to more elusive qualities. There’s a noticeable and more active interest in ‘commercial’ fiction (however you define it) or women’s fiction.

In middle grade, we were thrilled to see bookstore displays of the ‘Treehouse’ titles by Andy Griffiths and Terry Denton, which are selling very strongly in Korea (and throughout the world).

Travelling to Beijing from Seoul highlighted what we already knew: that each market is distinct and different. That holds true even while some of the trends are the same: for example, Australian children’s picture books do very well in China as they do in Korea. But it’s surprisingly difficult to highlight what the differences are. On a surface level, it was the different ways that publishers responded to titles that had been popular with Korean publishers, but far less so with Chinese publishers; the questions asked by the publishers in response to a pitch; and the awareness of the sheer size and diversity of the Chinese publishing market and readership, even just between Shanghai and Beijing.

It felt like there was a more clear distinction with fiction, and what Chinese publishers were looking for—that is, award-winning literature, film tie-ins and the big international commercial bestsellers. Nonfiction tends to be more substantial in content, less self-help oriented and more focused on business and global events.

As rights sellers, we meet with Korean and Chinese publishers at book fairs and do our own market research from our desk via trade magazines and websites. But the experience of having back-to-back meetings with publishers from a single market is a rare opportunity to learn not just about markets, or a publishing list, or an editor’s individual taste, but also how to pitch within each market. The more we learnt about the Chinese market, the more questions we seemed to have.