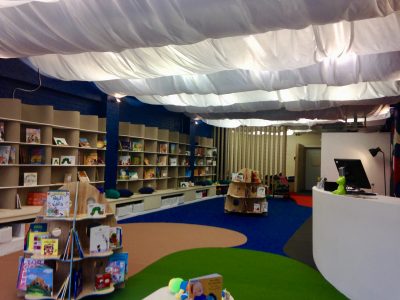 Open from Monday to Friday, the bookstore also serves as a café, creative learning and language acquisition hub and women’s centre for the community. It stocks children’s books in English and several other languages to promote literacy in the culturally diverse region.

Features of the new store include cloud-like light fixings, space-rocket bookshelves and an in-store mural by illustrator Kim Siew, who also designed the shopfront decals. The shop will also be staffed by bilingual speakers.

Lost in Books is the brainchild of Jane Stratton, creative director of Think+DO Tank Foundation, and was partially funded through a crowdfunding campaign in 2016, which raised over $38,000.

Store manager Yvonne Lam has a background in percussion and drumming, writing and arts organising. She told Books+Publishing the store will run a full public program, including a series of free creative workshops for women and children in the community with sessions on making quilts and creating zines. The store will also host music workshops for children, an after-school homework club and women’s conversation club, to be held in the café. Yam said she also hopes to launch book clubs for women and children, writers’ talks, storytelling time and preschool excursions.

As part of its event schedule, the store will also run workshops in public schools in Liverpool in an outreach program with the Liverpool Migrant Resource Centre called Wandering Books.

Funding from Create NSW’s Western Sydney Making Spaces Initiative will also allow the store to host a series of residencies run by parent organisation Think+DO Tank Foundation. The writers in residence program will be hosted in the store’s backroom studio and will ‘enable teams of emerging and established authors, graphic novelists and translators to develop, produce and deliver new literary works in languages other than English.’

Lam said she wants Lost in Books to be ‘a safe and welcoming space for kids to buy a bilingual book, read (or be read) stories in their home language, and experience a connection or attainment of their mother tongue’. ‘I want our shop to offer multilingual books to the community at accessible price points, and established ourselves as a community hub where stories, languages and memories are exchanged between generations. Most of all, I want Lost in Books to be financially self-sufficient, and to be around for a long time!’

For more on the shop, visit its website here.