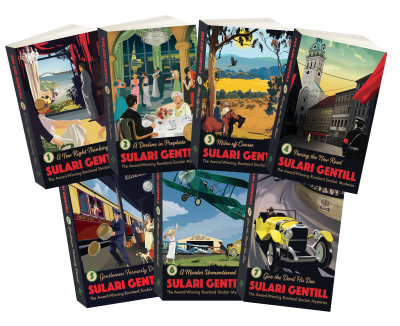 Pantera Press and Books on the Rail are partnering on a nationwide campaign for book eight of Sulari Gentill’s ‘Rowland Sinclair’ series, A Dangerous Language, to coincide with its release on 1 October.

Launching on 28 September, the campaign will see Books on the Rail and Pantera Press pair each of the seven previous volumes in Gentill’s series with a ‘book ninja’ stationed in each state and territory. This campaign also marks the first time that Books on the Rail will operate in the Northern Territory and Tasmania.

Participating ‘book ninjas’ include Instagram users Little Book Owl, Life and Literature and Half Deserted Streets, who will leave copies of their ‘Rowland Sinclair’ title on public transport networks in their state or territory.

The participating influencers, who have a combined Instagram following of over 200,000 users, will then promote the campaign on their social media platforms, with commuters and readers encouraged to post sightings of the books with the hashtag #bookninjas and #RowlandSinclairSpotted.

Ella Chapman, head of marketing at Pantera Press, said she first approached Books on the Rail to discuss the idea of promoting the publisher’s ‘Rowland Sinclair’ series cover redesign.

‘I wanted to do something unique with Books on the Rail that hadn’t been done before,’ said Chapman. ‘The social media reach for this campaign will drive great visibility for the series nationwide, but the best result will be reaching new readers organically and driving that all-important word-of-mouth recommendation.’

With over 1000 book ninjas across the country, Books on the Rail founders Michelle Kalus and Ali Berg said they have been ‘overwhelmed with support’ since they launched the initiative in Melbourne in 2016. ‘We are thrilled to be involved in this nationwide campaign with Pantera Press. We’ve chosen some of our really passionate book ninjas from around Australia to help share the book love.’