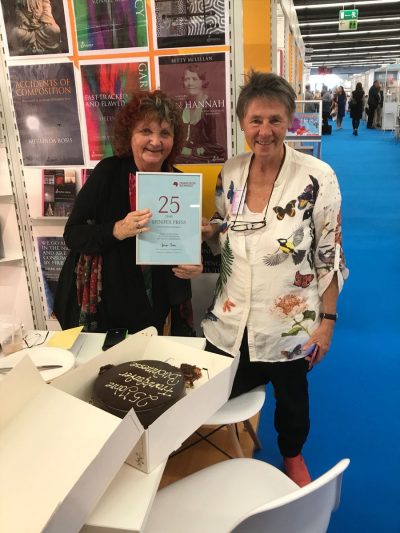 Allen & Unwin’s Emma Dorph and Maggie Thompson described their meetings as ‘quite upbeat, with most markets steady or slightly up’. They also noted that ‘all publishers had some slots for new voices’. ‘Perhaps because there were very few “big” titles at the fair we had very engaging meetings with most publishers and a lot of “yeses” to read,’ they said.

Dorph and Thompson also noted the influence of politics on the fair, which was opened by German Chancellor Angela Merkel and French President Emmanuel Macron. France was the guest of honour and Macron’s memoir Revolution will be published in English in November after Scribe acquired world English-language rights.

Dorph and Thompson said they were reminded in their meetings with foreign publishers ‘how precious it is to be able to meet and hear firsthand what is going on in their countries’. ‘We cheered a more stable, post-election France and commiserated with the troubles in Catalonia, but were grateful to be together to discuss books. This played out in the nonfiction titles that garnered interest at the fair,’ they said.

UNSW Press’ Kathy Bail observed that the fair was ‘back to trading in evocative stories and original content and distributing it in as many formats as possible, including audio’. She also noted ‘considerable speculation on the arrival of Amazon in the Australian market’.

‘Feedback to the idea was very positive and visitors appreciated the chance to see the breadth and quality of Australian books coming from the small publishing sector,’ said Bain, who added that the ‘interest in pursuing rights sales was excellent, with many submissions to be made over coming weeks’.

This year also marked Spinifex Press’ 25th year at the Frankfurt Book Fair. ‘On Thursday afternoon, Frankfurt Book Fair people arrived at our stand with a large chocolate cake,’ said Susan Hawthorne. ‘It was an enormous surprise and many at the shared Australian stand enjoyed it too.’

Narrative-driven literary fiction and women’s commercial fiction were popular categories for Allen & Unwin, according to Dorph and Thompson.

‘We were delighted by the interest in our literary fiction from either debut or emerging authors,’ said Dorph and Thompson, who reported ‘many requests for our upcoming titles Colin Dray’s Sign, Kate Lyons’ The Man on the Stair and Jenny Ackland’s Little Gods, with strong narrative hooks and dazzling writing propelled along by a “mystery” angle’.

Popular women’s commercial fiction titles included the historical novels The Sisters’ Song by Louise Allan and Eleanor’s Secret by Caroline Beecham and the contemporary novels The Mummy Bloggers by Holly Wainwright and Lovesome by Sally Seltmann.

Dorph and Thompson said their enthusiasm for ‘slow-burners’ such as Sarah Bailey’s The Dark Lake and its untitled sequel, as well as Alex Miller, Sofie Laguna and Stella Award-winner Heather Rose, also encouraged renewed interest in these authors.

‘From our fiction list there was worldwide interest in Robert Lukins’ literary debut The Everlasting Sunday as well as Sally Piper’s and Cass Moriarty’s more commercial The Geography of Friendship and Parting Words,’ said McCormack.

McCormack also reported a ‘strong response, particularly from Canada and in translation markets’, to works from Indigenous authors such as Tony Birch, Melissa Lucashenko and Ellen van Neerven, and noted that ‘many international publishers seemed more open to short-story collections from emerging authors’, requesting copies of Julie Koh’s Portable Curiosities and Laura Elvery’s Trick of the Light.

One of the fiction highlights for Zeitgeist Agency was Holly Ringland’s forthcoming debut The Lost Flowers of Alice Hart (HarperCollins), which has already sold into 16 territories. Benython Oldfield said the agency focused on Nordic, Canadian, Chinese, Russian and Eastern European publishers, with the novel now being considered in these territories.

Strong fiction titles for Spinifex Press were Lady of the Realm by Hoa Pham and Locust Girl by Merlinda Bobis—which both received interest from publishers in Vietnam, France, South Africa and Poland—as well as Hawthorne’s Dark Matters: A Novel.

When it came to nonfiction, Allen & Unwin’s Dorph and Thompson observed that there was a ‘trend away from biographies and memoirs on our list, although there were some big international memoirs at the fair that we kept hearing about’. ‘One standout, Girls at the Piano by Virginia Lloyd, sparked interest as it aims to weave together history, literature and the author’s personal memoir,’ they said.

‘Titles regarding current affairs such as politics, the dark web, feminism and Islam proved polarising, with strong positive/negative reactions but very few “maybes”,’ said Dorph and Thompson. ‘Those with an angle of being humorous or “sassy”, such as Helen Razer’s irreverent Total Propaganda or Melissa Browne’s Unf*ck Your Finances, went down well among publishers.’

In contrast, Sophy Williams from Black Inc. described this year’s fair as a ‘memoir fair’, with ‘high-profile memoirs from both Obamas, Macron and a nine-way auction on [The Who singer] Roger Daltrey’s story’. ‘I noticed a trend away from big political books to more personal, local stories,’ said Williams. ‘The exception is the USA, which is still trying to make sense of the Trump era with a big range of books on the topic.’

Among Black Inc.’s standout nonfiction titles were Brooke McAlary’s Destination Simple, ‘with another deal just in from Portugal, taking total territories to five’; and the forthcoming 2062 from Toby Walsh, whose previous book It’s Alive! has sold into seven territories.

‘The book on our list that attracted the most interest was The Secret Life of Whales by Micheline Jenner,’ said Bail from UNSW Press, who noted that ‘Tim Winton’s endorsement was an excellent starting point in meetings’. ‘Other material we’ll be sending out in the coming months includes the next book by the author of Why the Future is Workless, Tim Dunlop, and Sex on your Brain by Amee Baird.’

UQP’s ‘nonfiction star’ was Charles Massy’s Call of the Reed Warbler, which explores ‘regenerative agriculture and the link between soil and health’. ‘We are very hopeful of receiving a rights offer from [the US] soon, and perhaps from other markets too,’ said McCormack, who also reported ‘strong interest’ from UK and translation publishers in Josie Dietrich’s In Danger, a ‘powerful story on how her mother’s death from cancer saved her life’.

One of Zeitgeist Agency’s highlights was Scribe UK’s Philip Gwyn Jones passing on a copy of Damon Young’s The Art of Reading (published by MUP in ANZ and Scribe in the UK) to the French President, ‘who carried it around like he owned it’. ‘This led to a great talking point at meetings where a number of publishers then asked enthusiastically for a copy,’ said Oldfield.

Oldfield said the agency had a number of first-time meetings with Russian publishers and ‘when we asked if they were interested in “family or women’s stories” (most of our catalogue) the answer was a strong Nyet’. However, Campbell McConachie’s true crime book The Fatalist (Hachette), about Australian’s worst serial murderer, ‘was resoundingly the Russians’ top pick from our list’, said Oldfield.

Spinifex Press’ foreign language agents for Spain, Italy, Turkey and Poland were enthusiastic about Surrogacy: A Human Rights Violation by Renate Klein and The End of Patriarchy by Robert Jensen, while Hawthorne’s Bibliodiversity and Wild Politics also attracted attention, with the former ‘very likely to be published in Indonesia’ and the latter ‘suddenly creating interest in Germany, Spain and Canada’, said Hawthorne.

Big Sky Publishing marked its fourth visit to the fair with seven rights deals and two acquisitions. Publisher Denny Neave noted that all bar two countries he spoke to mentioned improved conditions and were optimistic. ‘Many have seen increased volumes but stagnant prices. In general though the mood was up,’ he said.

‘The Frankfurt Book Fair was a very busy and upbeat one for Scholastic Australia,’ reported Clare Pretyman. ‘Our international “Bad Guys” publishers were abuzz with news on the forthcoming plans for the series [by Aaron Blabey], while publishers from markets in which the rights are still available are very eager to consider the series, with further deals expected to follow shortly.’

Pretyman said there was ‘strong interest in our illustrated younger fiction, middle grade and YA, and this broad spread of interest has been a consistent theme of recent fairs’. She also noted the ‘re-emerging strength of picture books, which international publishers report to be a growing area of business in various markets’.

UQP’s McCormack said there was much overseas interest in YA author Claire Zorn, whose latest book One Would Think the Deep has been included on this year’s White Ravens list.

Other Australian YA novels that attracted international attention were Violet Grace’s forthcoming trilogy ‘The Chess Raven Chronicles’ (Black Inc.) and Amanda Betts’ forthcoming duology ‘The Vault’ (Pan Macmillan). ‘“The Vault” was our most-requested title and we have high hopes for this selling into fifteen or more territories,’ said Zeitgeist Agency’s Oldfield.