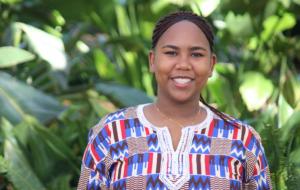 ‘Almitra Amongst Ghosts’ was announced as the winner on 14 December 2017. Chosen from a shortlist of 10, the winning extract forms part of a larger collection in development, String Theory, which ‘follows three Sudanese refugee youths through their coming-of-age in Australia, and explores Sudanese storytelling techniques through western writing styles’.

Judges Alice Pung, Christos Tsolkias and Tony Ayres praised Ismail for inventing ‘a new style of poetry-prose that incorporates her home culture with English in a startling way’. The judges also commended two runners up: Sivashneel Sanjappa for ‘The Journey Home’ and Jessie Tu for ‘Another Country’.

Ismail receives $3000, a year-long mentorship with an established writer and will be considered for publication by Black Inc. The extract will also be published in Mascara Literary Review.

The Deborah Cass Prize was established by Writers Victoria in 2015 to honour academic and writer Deborah Cass who was the granddaughter of Jewish immigrants, and is awarded to an ‘early-career Victorian author who was born overseas or has at least one parent who was born overseas’. In 2017, the prize opened up eligibility to include writers from anywhere around the country.

As previously reported by Books+Publishing, 2015 winner Moreno Giovannoni’s manuscript ‘Tales of San Ginese’ was acquired by Black Inc. for publication in 2018. Jean Bachoura won the 2016 prize for his manuscript ‘Night Falls’.