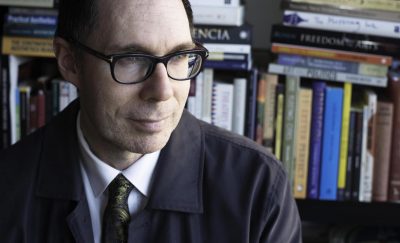 Following the launch of the full program for this year’s festival, Yeoman spoke to Books+Publishing about his top picks from the program, how his cross-disciplinary background informed his programming and where he sees arts events heading.

What is the theme or inspiration for this year’s festival?

The working title has been ‘The Art of Story’. I really wanted to focus on storytelling, primarily in written form, but beyond that as spoken word, as music, as still and moving images, and even as architecture. That, and the idea of literature being something special and apart: something sacred, but also embodied in the everyday and a natural and healthy part of our lives. Finally, I wanted to remind the audience—adults especially—to embrace mystery, fun, spontaneity and theatricality at every opportunity, without sacrificing a certain intellectual rigor and skepticism.

You stepped into the role of guest curator in August last year. What was that transition like, and how did you approach the role?

Big shoes to fill: Katherine Dorrington had been running the writers’ festival for 12 years and left behind a somewhat intimidating legacy when she departed in July of last year to set up a new children’s literature festival. Perth Festival artistic director Wendy Martin invited me to jump in headfirst and I did, initially taking four weeks’ leave from the West to pick up where Katherine had left off and pull together a program in, as Wendy says, record time!

I then returned to my day job full-time while working two days a week at the festival to keep things on track. That was, and is, the single biggest challenge: working seven days a week in two very demanding jobs. Luckily, I have an understanding wife and terrific support from my colleagues, especially those at the festival like PFWW producer Anna Kosky and PFWW program coordinator Liz Newell, without whom nothing would happen.

My approach throughout was to look for connections and to see how they might fit in the context of the larger Perth Festival of which PFWW is a part. Accessibility and diversity were also chief considerations, as they should be for any festival.

You recently launched the full program. What are your personal picks and what do you anticipate will be the highlights of the festival?

My personal picks are probably the ones I rather selfishly chose to chair myself—Captain’s Picks! Among those are the in-conversation with two of my favorite Australian authors, Helen Garner and Kim Scott; talking aesthetics with A C Grayling and Alan Hollinghurst; and talking architecture and music with Geoffrey London and Geoffrey Lancaster.

I think the overall highlights, some of which have already sold out, are: the aforementioned in-conversation with Garner and Scott; but also Tim Winton previewing his new novel The Shepherd’s Hut; the breakfast session with three women writers who’ve won the Miles Franklin—Josephine Wilson, Michelle de Kretser and Sofie Laguna; a storytelling session with Richard Fidler, Kari Gislason, Kate Forsyth, Lorena Carrington and Josie Boyle; Tim Rogers and Tex Perkins in conversation with The West’s music editor Simon Collins; and a great session on Indigenous speculative fiction organised by Westerly Magazine, featuring Ambelin Kwaymullina, Claire G Coleman and Paul Collis.

You’ve previously worked as a classical music writer and have written about several art forms. Does that cross-disciplinary background inform the way you approach directing a major arts event like this?

Absolutely it does. I mentioned theatre and the performative aspects of writers’ festivals above. That comes from my own experience as an occasional performing musician and as an arts writer.

Working with Wendy has been inspirational too, because she’s always looking for connections among different disciplines, different art forms; as a festival director, she also considers herself a storyteller. So we hit it off immediately, and she’s been very supportive of my incorporating elements such as architecture, classical music and even a fashion show into the program as legitimate forms of storytelling.

Working with Perth Festival film program manager Tom Vincent on a film retrospective of Beka and Lemoine’s fabulous architecture and people documentaries as part of PFWW has been a bonus.

Ultimately however, I think having a strong interest in different art forms helps you conceptualise a writers’ festival program as sometimes a theatre piece, sometimes a symphony, sometimes a ballet, sometimes all of those together. It really fires the imagination!

What trends or emerging ideas are you excited about seeing in live events at the moment?

I think the seemingly insatiable hunger for live events, full stop. It might be a cliché now to say people are more and more interested in purchasing experiences as opposed to things, but it points to a reaction against this loss of connection we’re all feeling at the moment, despite being more connected than ever before.

The difference between a virtual experience and a vicarious experience is that the latter—especially as embodied in reading—more readily engenders empathy. It also stimulates the imagination and therefore comes much closer to replicating so-called reality than a platform that provides so much information it becomes prescriptive rather than evocative.

In the past, Australian literature has been accused of being a bit East Coast-centric. Do you think this is still the case?

I do think it is still the case, unfortunately. Which is bizarre considering so many of this country’s greatest authors and poets—Tim Winton, Kim Scott, Josephine Wilson, Liz Bryski, Robert Drewe, John Kinsella and of course the late Fay Zwicky and Randolph Stow, to name but a few—are West Australian. What this festival should, and hopefully does, provide, is a showcase not only of many of those authors’ work but that of terrific new and emerging talent, such as Claire G Coleman, Dervla McTiernan, Laurie Steed, Michelle Johnston, Elizabeth Tan and more.

How do you think festivals can be more accessible?

Easy: don’t be so snobbish or elitist. Aim for the highest possible artistic and intellectual standards, yes; but also look at what people are actually reading and program accordingly.

A number of literary festivals and programs have launched in the past few years. What makes PFWW unique and how do you ensure a program stands out?

I may already have answered that question! I think celebrating local talent in a national and international context guarantees a certain uniqueness.

Beyond that, a willingness to take risks, and to embrace other forms of storytelling. One thing we’re trying out is starting each session—wherever the author is agreeable—with a short reading, which I’m not sure has been done very often. It’s a way of setting the tone for the conversation to follow while ensuring the primacy of the author’s art over those more abstract ideas and concepts, which I feel some writers’ festival sessions can get bogged down with.

What are you reading now?