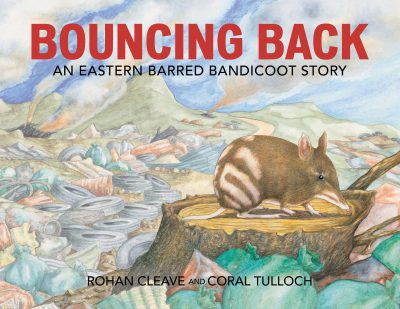 Best known for their conservation-focused picture book Phasmid, Rohan Cleave and Coral Tulloch have now turned their attention to the endangered Eastern Barred Bandicoot in Bouncing Back. The story makes a good effort to cover the zoological details—species description, history, habitat, threatened status and conservation efforts—but the narrative itself is a little lacking in structural or emotional emphasis. It could have benefited from some streamlining to let the unique and quirky details shine through—such as how the species was thought to be extinct until a small population was found dwelling in a tip. The fine detail of Tulloch’s pencil-and-watercolour drawings is pleasing, and the many bandicoots are expressive without being anthropomorphised. A muted, low-contrast palette keeps the visual tone very gentle, which characterises the small, shy creatures well, and may suit the younger end of the book’s target range of primary-aged readers. However, it also brings a slightly faded feel, lowering the book’s visual energy. Still, the book would be a good classroom discussion starter to help children understand how they might contribute to conservation efforts (as the book’s final page, in an awkward shift of narrative perspective, entreats them to do).

Anica Boulanger-Mashberg is a freelance editor and writer, and a bookseller at The Hobart Bookshop