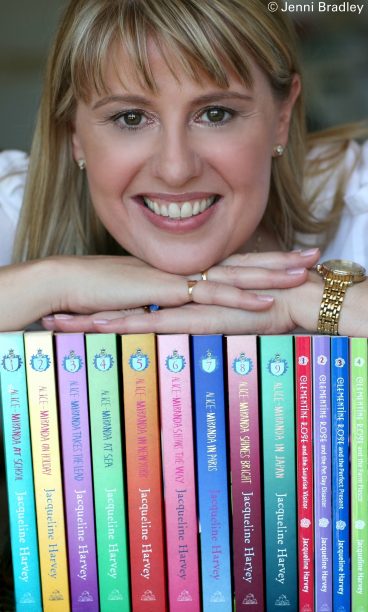 Clued up: Jacqueline Harvey on ‘Breaking News: Kensy and Max Book One’

‘Alice-Miranda’ and ‘Clementine Rose’ author Jacqueline Harvey assembles a world of espionage and mystery in Breaking News: Kensy and Max Book One (Random House, March), which reviewer Natalie Crawford says ‘will appeal to Harvey’s existing fan base, while also engaging male readers with the inclusion of the debonair Max’. Harvey spoke to Books+Publishing about launching a new adventure series.

Where did you get the idea for your new series?

The characters of Kensy and Max have been brewing for a long time. I wrote outlines for them about 10 years ago but I wasn’t sure what to do with them. The spark for the story came from visiting a pub called The Morpeth Arms in Millbank, London. They have a restaurant upstairs called The Spying Room with binoculars on the tables. I realised that the idea was to spy on the MI6 building directly across the Thames. I got talking to the publican, and he told me that in 16 years he’s never seen a soul inside the MI6 building, just the lights and computers going on and off and some people on the balconies. It got me thinking, why would you tell the whole world the exact location of your national spy organisation? That conversation and a tour of the underground cells in the pub sparked quite a few ideas for ‘Kensy and Max’. What if the most important spy organisation in the world was really under a school around the corner from the pub? What if MI6 and their contemporaries were pretty much public relations companies? The ideas just grew from there!

After 16 ‘Alice-Miranda’ and 13 ‘Clementine Rose’ books, does launching a new series present any challenges?

Alice-Miranda and Clementine Rose are so much a part of me, I had to find a way to make sure that I was incredibly well acquainted with Kensy and Max and the entire cast of new characters before I really got my teeth into the writing. I always have to know the ‘big ideas’ in the story before I start, and I also like to have a good handle on the ending. I don’t plan every detail because it’s fun to let the characters surprise you, but having a general plan really works for me and allows me to write more quickly. While I know there are many boys who are fans of Clementine Rose and Alice-Miranda, we still suffer with the ‘that’s a girl’s book’ syndrome in Australia. So I hope that by having male and female protagonists and lots of action and adventure, I will start hearing from many more boys who are reading my books.

How do you go about creating a whole new cast of characters when you launch a new series?

I adore creating new characters. It’s one of the best things about writing. I try to make sure that the cast is diverse and quirky and there is depth to everyone—that they each have their own special traits. Kensy and Max are quite different but also have complementary skills. It was important to me that they were best friends; they’ve led an unusual life even before they end up in London so being there for each other is critical. I thought it would be fun to have twin butlers in the book too—Song and Sidney—something the children don’t discover for a while, and populating the school was loads of fun. I can spend days coming up with the perfect names and backstories so that I know the characters really well, even before the story begins.

Did you do a lot of research into spy tropes for this book?

I was a huge fan of Get Smart when I was a child. The idea of Max’s shoe phone was extraordinary, but who’d have thought back in the 1970s that you would be able to wear your phone on your wrist now? I did quite a bit of research into gadgets and spent lots of time researching the Caesar Cipher, Morse code, spy cameras and secret passages, but I’ve also made things up that I don’t know to be true—like the holograms in the back of the taxis. The second book will have many more gadgets and gizmos as the children’s new life is fully revealed.

Kensy and Max are a bit older than the protagonists of your other series. Do you feel these books are aimed at an older audience?

There’s a belief that kids won’t read books with protagonists who are younger than themselves. It certainly hasn’t proven true for either Clementine Rose, who is five when we meet her, or Alice- Miranda, who starts the series at the ripe old age of seven and one quarter. Both girls have aged along the way but I regularly receive fan mail from kids who are 12 and 13 years old who started reading the books as children, and have continued as they’ve gotten older (some tell me the stories are like their ‘comfort readers’). I hope that ‘Kensy and Max’ will have a similarly broad readership. I didn’t think a lot about their ages but it seemed the right time and circumstance to make them 11 years old.

What future adventures can we expect from Kensy and Max?

The end of the first book is quite the cliffhanger— there’s a lot for the twins to learn and so much excitement coming up. The second book will see them doing some amazing training activities, and there’s a school trip to Rome, which turns out to be anything but your average history tour. At this stage I am contracted to write four books in the series, but I hope that turns into many more. I can see them having adventures all around the world and I’m really keen to bring them back to Australia. There is an overarching mystery to the series, while each book will also have its own self-contained drama.

Booksellers celebrate LYBD in and out of lockdown  Features