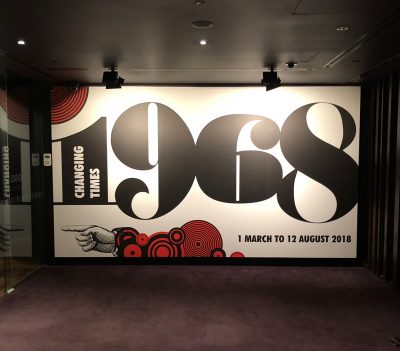 The National Library of Australia (NLA) is holding an exhibition to celebrate the 50th anniversary of the library building’s construction and to further explore the year 1968 in history.

The exhibition, called ‘1968: Changing Times’, attempts to bring the viewer back to the time of the library’s construction and uses the library’s collection of books, manuscripts, photographs, music, posters, furniture and ephemera to explore what the year meant to Australia and rest of the world.

In 1968, the anti-Vietnam War movement was growing, Lionel Rose became the first Indigenous boxer to win a world boxing title, and both civil rights leader Martin Luther King Jr and US president Robert F Kennedy were assassinated. Also at that time, Australia was in shock after the disappearance of Prime Minister Harold Holt in the previous year. Prime minister Robert Menzies took great interest in the construction of the library, which opened at its new site beside Canberra’s Lake Burley Griffin on 15 August 1968.

The exhibition features a copy of To the Wild Sky by Ivan Southall (winner of the Children’s Book Council of Australia’s Book of the Year Award), The Unlucky Australians by Frank Hardy, Couples by American author John Updike and The Margaret Fulton Cookbook by Margaret Fulton (all various imprints). The music of Bob Dylan and the Beatles were popular during 1968 and Paul McCartney’s rendition of Those Were the Days is one of the songs that can be heard playing during the exhibition.

Read more about the exhibition, running 1 March to 12 August, here.