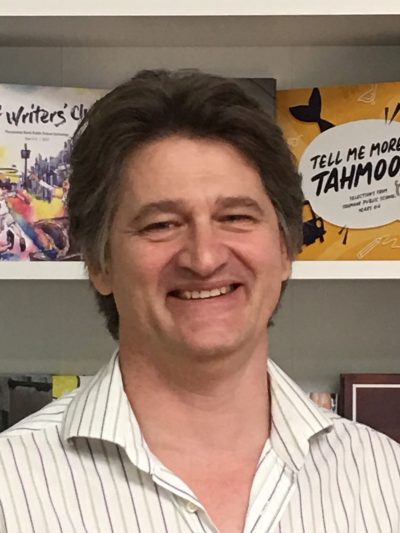 WestWords is an independent company based in Parramatta that began its life as The Western Sydney Young People’s Literature Development Project in 2007. Established to address the low level of literature development in Western Sydney, it was an initiative of the New South Wales Government. Since then, the company has grown and in 2017, it presented over a hundred activities and programs to young people in Western Sydney. Books+Publishing spoke to executive director Michael Campbell (pictured) about the plans for the future.

Can you describe for those who aren’t familiar with your organisation what WestWords does and what role it plays in the broader literacy/arts/cultural landscape?

WestWords celebrates and champions the people, places and cultures that are at the heart of Western Sydney. We provide opportunities for writers to develop authentic voices that are true to their experiences and the worlds of their imagination. We then showcase them through innovative, literature-based, multi-arts programs. To achieve this, we deliver a comprehensive program of residencies, fellowships, workshops, courses, mentorships, writers’ groups, performances, presentations, exhibitions and publications.

We also recognise a definition of literature that is far reaching, one that intersects with writing and other artforms such as big and small screen, the visual arts, music and digital, as well as the multiplicity of Western Sydney’s cultural expressions. Why? Because we believe the power of literature and literacy (written, oral and visual), self-expression and creativity can change lives and the experiences of people and communities.

When you look for partnership opportunities, what are you looking for? What core principles drive you to work on the programs you do?

Our approach is very simple—we have conversations and together we identify the need, we imagine the potential, then we figure out how best we can work together (which includes discussions about everything from logistics to resourcing). We create the profile of the best, most appropriate person to facilitate the project, then we support and manage the project through to completion. And then we begin again.

It’s been a big year for WestWords. Last year you received funding to provide a mix of long and short-term residential spaces in Campbelltown, Parramatta and the Blue Mountains, and also partnered with a number of festivals and residencies. Can you talk about some forthcoming highlights?

It really was a huge year last year! We did 111 separate activities, worked with 91 professional writers, editors and illustrators and partnered with 38 separate organisations and 15 schools.

2018 looks no less exciting. We are about to launch individual programs in each of our centres which will include workshops and events such as author talks and panel discussions, created in consultation with the members of each of those writers’ groups. Workshop/masterclass leaders include writers, illustrators and poets Mark Tredinnick, Inez Baranay, Luke Carman, Michelle Cahill, Judith Beveridge, Tohby Riddle and Ursula Dubosarsky, as well as editor Natalie Muller.

Some other highlights in the next six months include:

Can you talk about some of the ways you collaborate with the book trade to deliver your programs? Are there ways you think the industry (authors, publishers, booksellers) can work together more?

WestWords is a literature development organisation. That means development for writers and their craft, development for the artform and audience development. Primarily we work with the book by showcasing writers, selling their works and assisting with author tours. But there is more to be done! We are open to, and will be seeking, mutually beneficial conversations that can result in the development in all these areas.

As a place based organisation we encounter the many stereotypes that are being placed upon the region, and quite often internalised by its inhabitants. But what we have found is that there is a much more diverse picture than a handful of simple preconceptions can encompass. Beyond cultural diversity, the region contains many hidden diversities. There are myriad intersecting creative practices, writers working across genre, writers whose work is sustained by the US speculative and crime fiction markets, writers who live/work/are from WS who don’t label themselves as such, etc.

I think a useful starting point to thinking about how the industry can work together more with organisations such as ours is to think about how to address some of the barriers being felt … which neatly leads onto the next question.

Diversity seems to be a big focus for WestWords. As an organisation based out of a multilingual area like Greater Western Sydney, what are some of the barriers you see facing people from marginalised backgrounds who are looking to work in the literary arts? What does WestWords do to support these voices? And what more do you think needs to be done?

Everyone has a story. Not everyone has the commitment to crafting it into work that will reach beyond themselves, their friends and their families. This, as every artist knows is the creative practice. We seek, through our programming, to support and develop the skills of those writers to reach beyond themselves, to have the confidence that others are open to their experience and creativity. We have participants in our programs that are working in/with a second or third language. We have writers that look elsewhere for connection, be that to other markets or to their countries of origin or to their own communities.

How do we widen the eyes, ears and minds of the industry to recognize the potential and richness that is on offer? Be actively and demonstrably interested in the totality of the voices, stories, writers and writing emerging from the region, and cultivate a presence here; don’t be caught up by preconceptions; be committed to develop the market—and there is a large, potential audience here:

Can you talk a bit about your own career in literacy/reading/books? And what aspects of your previous experience you’re bringing to your role now?

I began my professional career as a principal dancer in the West Australian Ballet, Queensland Ballet and in Germany as a principal in one of the country’s foremost contemporary/dance companies, Tanzforum der Stadt Köln. When I wasn’t being physical, I read and read.

As my dance career waned, as it does when bodies take longer to recover, I returned to Australia and continued working in the performing arts: directing, choreographing and writing. I also became the literary events manager at Gleebooks in Sydney, where up to six nights a week I listened to the country’s leading writers and thinkers talk about their books. This job led directly into becoming the festival director for the Brisbane Writers Festival. When I came back to Sydney, I spent some time undertaking majority care for my children in their pre-school years and continued to write for performance, direct shows and edit books.

Now as the executive director of WestWords, working in and with the multi-faceted communities of Western Sydney, I believe I bring an artistic sensibility and sensitivity to the role, an understanding of how to connect stories, narratives and insights across artforms and diverse audiences, as well as a personal understanding of what it means to be a practicing artist.

I also bring to the role a solid track record of arts administration spanning the precarious independent sector to Opera Australia, our largest performing arts company.

I have many books beside my bed, on my shelves, sitting on my desk at work … Many are in progress as I pick them up responding to my various moods and levels of sleep deprivation. But the book I finished just last night was Libby Gleeson’s Australia’s Great War: 1918 (Scholastic). The work is compelling, immediate and strong, containing deftly hidden depths of research and effortless craftsmanship.