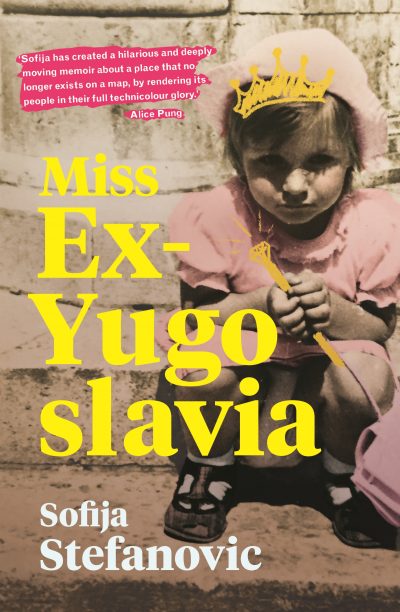 Miss Ex-Yugoslavia is a coming-of-age memoir that brims with warmth, curiosity and a genuine affection for commonplace family drama. Written by Serbian-Australian writer and filmmaker Sofija Stefanovic, who describes herself as ‘cynical’ and ‘story-hungry’, the book is bursting at the seams with contradictions and comedy: a beauty pageant to celebrate a country that no longer exists, socialist dictators looming over daily household arguments, Chernobyl and a civil war as the backdrop to annual summer holidays in Croatia, and a beloved grandmother who had ambitions to become an Olympic gymnast, but now keeps all her cash in an envelope under the couch. Throughout the book, Stefanovic’s interwoven family stories have three essential ingredients: tragedy, comedy and chaos. With a self-deprecating sense of humor, she recalls her experience growing up trying to feel at home in between a crumbling socialist Yugoslavia and a shiny, new Australia, trying to shed the ‘dumb foreign kid’ stereotype, navigating the pitfalls of the English language and outgrowing her parents’ native language. Stefanovic’s story feels cinematic, but also finds joy in the unsavoury things we don’t always see on-screen: poo, glass shards, cigarette butts, vomit, unbrushed teeth. This memoir will not only appeal to self-described ‘Yugo-nostalgics’—anyone who longs for the pre-war Yugoslavia where ‘kids of all nationalities played in the parking lots without fear of death’—but also to readers who enjoyed Marjane Satrapi’s graphic memoir Persepolis and Elif Batuman’s coming-of-age debut The Idiot.

Nathania Gilson is a Melbourne-based writer and editorial assistant at Books+Publishing.