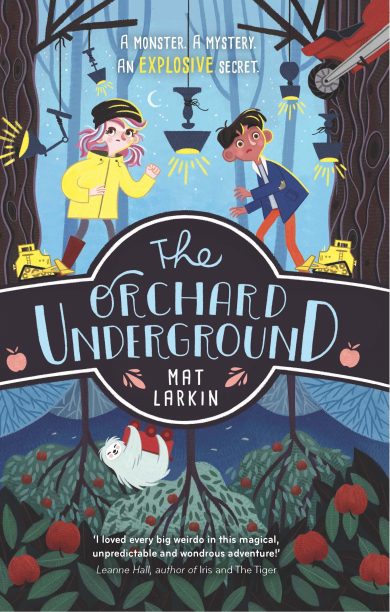 The Orchard Underground is a funny and intriguing debut that’s mercifully free of a ‘tween’ sensibility but never patronising to its upper-primary readers. The story is fresh and strange: the town of Dunn’s Orchard seems dull and mundane on the surface but turns out to be anything but. Protagonist Pri Kohli narrates in first person with an amusing penchant for accidentally speaking his thoughts aloud. Provoking and sometimes irritating Pri on his journey of discovery is Atticus Stone, a bizarre and precocious young girl with a desire to solve mysteries. She pops into Pri’s life and overturns all his assumptions about his town. The two child characters are deliciously peculiar but still believable, and Pri’s connection to his family is nicely balanced against his intense new friendship with Atticus. The book’s droll sense of humour is clever yet subtle, based on careful repetition, well-timed punchlines and a dry cynicism that’s both sophisticated and age-appropriate. Mat Larkin’s rich use of language will reward intelligent readers, but flows so smoothly it will also be accessible for those less confident. His humour and zany imagination are never a distraction from the narrative, which maintains an increasingly insistent pace as it approaches its (nearly too fantastical) conclusion.

Anica Boulanger-Mashberg is a freelance editor and writer, and a bookseller at the Hobart Bookshop