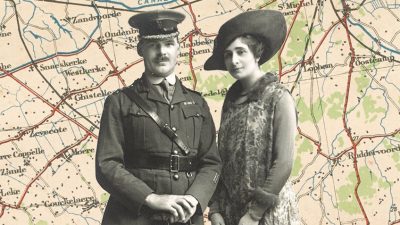 State Library Victoria (SLV) has launched a public appeal to raise $100,000 to preserve and make publicly available the Walter and Helena Cass Collection.

The collection provides an insight into the lives of Helena Cass, a Canadian army nurse who became a pioneering journalist, and her husband Walter, a decorated Australian officer who served during World War I. It contains thousand of items including love letters, photographs, paintings, Helena’s wartime nurse’s uniform and her typewriter, and Walter’s military boots.

‘With the public’s support we can undertake the intensive and delicate work required to preserve and catalogue this precious collection and make this material available for everyone to discover, explore and enjoy,’ said SLV CEO Kate Torney. ‘The extraordinary story of Walter and Helena Cass is one that deserves to be told, they were remarkable individuals.’

Diana Cousens, granddaughter of the Casses, said, ‘Their stories don’t just belong to me, they belong to everyone. They tell us a lot about who we are today and where we’ve come from, and that’s why it’s so important for the public to support this appeal to make the collection accessible.’

As a solider, Walter served in the Boer War, the landing at Gallipoli and at the battle of Fromelles, and he led the funeral procession for Sir John Monash in 1931. Helena left her job as a nurse to raise her child, then worked as a journalist, writing for publications such as The Age, The Advertiser of Adelaide and Harper’s Magazine, as well as broadcasting on the ABC and BBC.

The collection appeal runs until 30 June. Donations can be made here, and a video about the collection can be viewed here.

(Image: Walter and Helena Cass (nee Holmes), shortly after their marriage and arrival in Melbourne, 1917, from the SLV collection)