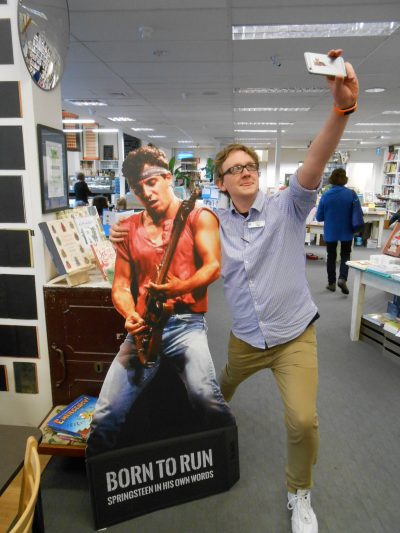 Meet the ABA Young Booksellers of the Year: Tim Jarvis from Fullers Bookshop

In the week leading up to the Australian Booksellers Association (ABA) 2018 conference, Books+Publishing spoke to each of the five shortlisted nominees for Young Bookseller of the Year ahead of the winner’s announcement on 17 June.

In this instalment, we talk to Tim Jarvis, bookseller at Fullers Bookshop in Hobart. ‘In my 28 years, Tim is only the third colleague who has the innate indescribable instinct to buy—an unteachable skill,’ writes manager Cat Schulz in her nomination. ‘Tim’s amiable egalitarian nature combined with his depth of knowledge make him a secret weapon with customers, and the way his (to me) esoteric knowledge translates into hard sales is a delight.’

What are the top three things you wish you’d known when you were starting out in the book industry?

1. That I don’t have to read every book that comes in. (I read very slowly.) I still feel a professional obligation to have already read everything, but I don’t feel so tyrannised by unread books as I once did.

2. Who Richard Fidler is. My life would have been so much easier in those early months if I’d known ‘I heard about this book on the radio’ meant ‘the author was on [ABC Radio National’s] Conversations’.

3. Don’t underestimate the value of display. As much as I like rummaging around on obscure shelves in the back room of a bookshop, and I like to believe that good titles sell themselves, I’ve learned that books really do sell faster when they have room to breathe.

What has been your biggest achievement or proudest moment as a bookseller?

It must be when I lined up an event with Christopher de Hamel (author of Meetings with Remarkable Manuscripts: Twelve Journeys into the Medieval World, Allen Lane) earlier this year. The stars all aligned: he was going to be in Hobart on a speaking tour, and was delighted to hear we’d taken such an interest in his book. Further, Penguin’s head office in the UK were so tickled at the thought of holding (what de Hamel called) the ‘World Paperback Launch’ in Hobart that they let us have stock of the paperback a few weeks before its official release. Even though it was a Monday lunchtime, 130 people showed up and completely packed the venue. He was such a great speaker that we had customers coming in for weeks afterwards to tell us it was one of the best talks they’d ever been to.

What’s the most valuable thing you’ve learned on the job?

That customers (and by extension, anyone) will tolerate just about any inconvenience so long as you’re polite and cheerful about it. This is extremely useful life advice.

What do you think this industry could do better?

Resist the rise of big discounters and monopolies like Amazon. Books are not (by and large) expensive items in the first place, but these businesses erode the perception of value, and I think the consequent risks for publishers, booksellers, authors and anyone who likes good books are very real. But I don’t think this is news to anyone.

Where would you like to be in five (or 10, or 20) years’ time? And what do you hope the industry will look like then?

To read all the interviews with the ABA Young Bookseller of the Year nominees, click here. To stay up-to-date with Australian book industry news and hear about the ABA Booksellers of the Year winners, sign up to our Daily Newsletter and Weekly Book Newsletter.