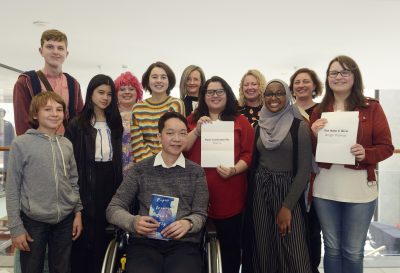 Peter Vu and Angie Thomas have won the 2018 Inky Awards, presented by the Centre for Youth Literature at the State Library of Victoria.

Peter Vu’s Paper Cranes Don’t Fly (Ford Street) won the Gold Inky Award for an Australian book, along with a cash prize of $2000. The novel describes the life of cancer patient Adam Auttenberg as he undergoes treatment with friends by his side. Vu’s own diagnosis of a brainstem glioma at age six, and the experience of his final surgery during Year 10, led him to write the novel.

American author Angie Thomas’ The Hate U Give (Walker) won the Silver Inky Award for an international book.

Readers aged between 12 and 20 voted online for the winners from shortlists chosen by a panel of teenage judges.

Vu said he felt ‘honoured’ to have won the Gold Inky, observing that he was a teenager himself when he finished writing Paper Cranes Don’t Fly. ‘Being called an author is still a funny concept to me, but being an award-winning one is something I never would have dreamed of,’ said Vu. ‘It’s also great to have won an award chosen by teens, as I think the Inkys encourage more young people to read.’

Now in their 12th year, the Inky Awards were founded in 2007 to recognise local and international fiction, poetry, anthologies and graphic novels written for young adults.

For more information about the Inky Awards, visit the Inside a Dog website.