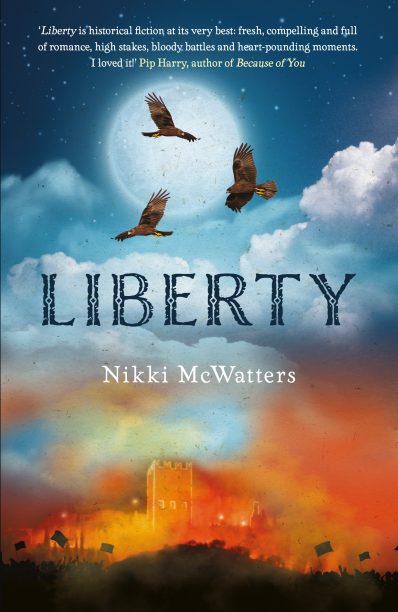 Three women, three centuries, three threats against freedom: Australian author Nikki McWatters’ new YA novel is an ambitious and timely exploration of power, politics and the sisterhood. In 1472 France, Jeanne, a teenage girl from a poor family, is forced into an arranged marriage while an invading army approaches her town of Beauvais; in 1797, a spirited Irish teen named Betsy fights to free Ireland from English rule alongside her brother and best friend; and in 1968, country girl Fiona moves to Brisbane and gets swept up in anti-Vietnam War protests at university as her brother receives his draft notice. McWatters conducted extensive research for this book: there’s a palpable sense of time and place in all three first-person narratives, unfolding in alternating chapters. While the prose in Jeanne’s and Betsy’s stories sometimes feels like it doesn’t quite fit the period—their tone lands somewhere between old-fashioned and contemporary—each girl still has a distinct voice and a compelling story. Jeanne, Betsy and Fiona’s struggles of being caught between the personal and political will resonate with today’s readers. This is a great pick for readers aged 13 years old and over with an interest in politics and feminism, and for those who love a cracking historical yarn.

Carody Culver is a Brisbane-based freelance writer and editor