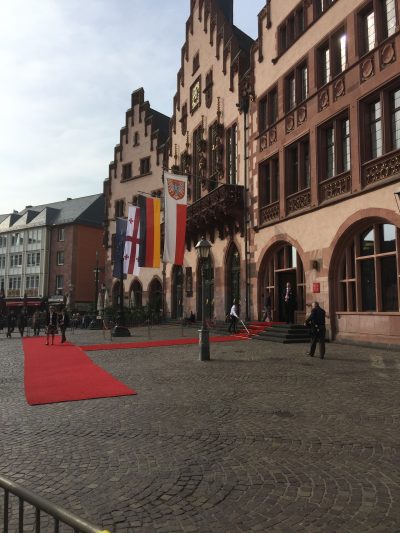 Allen & Unwin’s Emma Dorph explained that German paperback sales are down, and many German publishers have had to cut up to 25% of their lists this year—thus the German market is becoming more difficult to bring overseas titles into.

Dorph noted that in general publishers are being more conservative in their acquisitions—looking for ‘quality over quantity’—because bestsellers are eating up more and more of the market share, while the midlist suffers.

Natasha Solomun of Jacinta di Mase Management said that while the UK remains a difficult territory to sell into, it has ‘become easier to sell to the US and potentially grant them UK rights (if they have distribution there) as a way of getting around this issue’. Solomun also noted a turn towards submitting directly to Ireland and Canada, where these publishers can distribute into the UK and US, respectively. She said this is ‘a particularly good option for less commercial and more literary titles to find English-language publication overseas’.

For the second year, the Australian Publishers Association (APA) appointed former UQP CEO Greg Bain to present a selection of Australian titles to international publishers and agents. Bain represented around 23 titles from 13 small to medium-sized publishers. Bain reported ‘quite a lot’ of interest in translation rights from publishers in Greece, Italy, France, Poland and Brazil.

Several publishers said that crime fiction, thrillers and upmarket women’s fiction remained popular categories at this year fair. Solomun summed it up, saying, ‘Dystopia and fantasy are basically out and the new genre of “up-lit” fiction is on the rise.’

‘Publishers continue to look for books that land in that sweet spot of upmarket, commercial literary fiction which make for great book club reads,’ said Solomun.

Zeitgeist Agency’s Benython Oldfield reported ‘greatly reinvigorated interest’ from Scandinavian and Eastern European publishers for Holly Ringland’s The Lost Flowers of Alice Hart, for which screen rights were recently sold to Made Up Stories.

Crime and thrillers are ‘still selling well across all territories’, according to Solomun, but publishers are looking for books in these genres that are set in new locations, including Australia and New Zealand.

‘The demand for nonfiction was strong this year, as people seem to be opening up to more popular science and narrative nonfiction,’ said Dorph, adding that some international contacts thought that the uptake in nonfiction was influenced by the current political and economic climate, especially in Greece, Spain and Brazil. According to Dorph, readers are ‘looking for rational explanations to the world around them’.

She also observed that the trend in ‘neuro-’ related titles continues to ‘be going strong’—one of A&U’s titles with the most interest was a book on ancient memory techniques and how to apply them to improve your own memory.

Most publishers agreed that popular science is still a key category in all territories. However, Williams noted: ‘Scouts we spoke to said there was a distinct lack of “buzz books” in the nonfiction area this year, with most auctions announced before [the fair] began.’

Lead titles for Black Inc. included Jess Hill’s Untitled (June 2019, title not final), on domestic violence; a book on the big accounting firms, The Big Four (Stuart Kells & Ian Gow), which received new attention after the global success of Scott Galloway’s The Four; and Richard Cooke’s Tired of Winning: A Chronicle of American Decline. The outside perspective of Cooke—the US correspondent for the Monthly—was ‘a welcome change for editors from the multitude of insider accounts making the rounds’.

UNSW Press CEO Kathy Bail agreed that there was ‘plenty of interest’ in the popular science, philosophy and ethics categories. Bail said, ‘It was a great year to be promoting a nonfiction trade list from a university press: there is demand for well-executed books that help to make sense of our times (the good and the bad) and ask the right questions of those in power.’ Key titles for UNSW Press were Fred Watson’s Cosmic Addiction: A user’s guide to the universe, Alice Gorman’s exploration of the field of space archaeology Here Comes Dr Space Junk, and Australian academic Eleanor Gordon-Smith’s forthcoming debut What Makes You So Sure You’re Not Wrong?, for which UK rights sold to Scribe UK during the fair. Bail noted: ‘Publishers are willing to venture into new frontiers, encouraged by the phenomenal success of Astrophysics for People in a Hurry by Neil deGrasse Tyson, perhaps.’

A few Australians reported an interest in nonfiction titles related to feminism. Dorph noted that several Korean publishers said they were very interested in acquiring nonfiction dealing with feminist issues, while Solomun observed that, across Asia, demand for business titles and parenting titles remained strong.

‘Nonfiction was harder for us this year,’ said Hawthorne, but she nevertheless reported interest in Lindsay Simpson’s Adani, Following Its Dirty Footsteps, and forthcoming titles including an anthology called Broken Bonds: Surrogate Mothers Speak Out, a book on disability and creativity by Fiona Place, a biography by Sue Ingleton, and a book by Gurindji elders about traditional child-rearing practices called Karu.

Frankfurt Fair first-timer Sam Cooney, publisher at Brow Books, said that the small press received ‘a bunch of interest in [Maria Tumarkin’s] Axiomatic, even if many presses and agents wondered how they could make it work in their country/territory’. Cooney said his attendance at the fair was ‘a reconnaissance mission more than anything else’, but he found the experience ‘incredibly useful’.

‘There was very much an optimistic feel within children’s publishing at Frankfurt, with publishers eagerly on the lookout for bold new projects,’ reported Scholastic Australia rights manager Clare Pretyman.

YA was commonly cited as one of the most challenging categories at this year’s fair, however Pretyman noted that several publishers ‘felt the wheel was beginning to turn and were planning ahead on that basis’. For Scholastic, ‘clean’ YA, especially romance, was the most requested within the YA category, with Michael Gerard Bauer’s The Things That Will Not Stand gaining a lot of interest. Oldfield agreed that ‘interest in dystopian YA has slowed dramatically globally as publishers look for YA novels with everyday settings’.

On the picture book front, Greg Bain noted that environmental themes were popular, with foreign-language publishers indicating that they look to Australia for books dealing with these themes—particularly picture books also books for middle readers.

Scholastic’s stand-out picture book titles were Room On Our Rock (Kate & Jol Temple, illus by Terri Rose Baynton) and Philip Bunting’s How Did I Get Here?, for which Scholastic received 28 offers at auctions across 12 territories, with an additional Italian auction underway following Frankfurt and ‘strong interest’ from several other territories.

Solomun observed that picture books ‘remain difficult to sell in Europe as European publishers tend to keep to domestic authors for these’, and similarly, for the English-language market, ‘picture books need to be really special in order for them to sell into the UK and US’. However, Solomun also noted that buy-ins remain key in China and Taiwan, with the Japanese market remaining steady and the Korean market ‘dropping off somewhat’.

(Image: Outside the formal opening of the fair; credit: Gary Pengelly.)